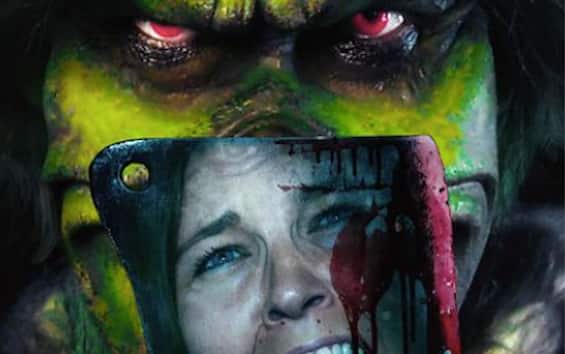 Recently many children’s stories that have marked the childhood of generations are undergoing one transformation to the dark side. The Mean One adds to the horror versions of Winnie The Pooh And Bambi, directed by Steve LaMorte. Fourth adaptation of Dr. Seuss’ book, How the Grinch Stole Christmas, The Mean One is an unauthorized parody so the creators had to avoid the names given in the book. So forget the funny and grumpy Jim Carrey of the 2000 live action or the animated series of the 60s, because the new Grinch it’s bad seriously.

The Mean One: the plot

Written by Finn and Flip Kobler, The Mean One tells the story of the Grinch who, for copyright reasons is called “the mean one” and is a green skinned monster terrorizing the inhabitants of a small mountain village called Newville. During the holiday season, he dons a blood-red Santa suit and begins killing innocent victims. His disturbing and brutal past comes knocking on her door again, as Cindy You-Know-Who returns to the village to take revenge for the murder of her parents twenty years before her at the hands of the violent creature. Will she find a way to defeat her and save Christmas?

The cast of The Mean One

David Howard Thornton plays the role of the protagonist and already has a certain familiarity with the Grinch because he has staged the show taken from the same book by Dr. Seuss several times in the theater. Cindy You-Know-Who is played instead by Krystle Martin, recently appeared in a couple of films but best known for her work as a stunt man and coordinator. Also one of the writers, Flip Kobler, will make an appearance in the film as Lou and in the rest of the cast we also find Erik Baker, John Bigham, Chase Mullins and Amy Schumaker, producer who will play the role of the mayor of the village.

The trailer of The Mean One

The trailer shows the disturbing and bloody images from The Mean One, presented as a slasher movie to spend the Christmas holidays with adrenaline and a little tension. There seems to be a lot of action scenes, some dark humor and an explosive pace between chases, hand-to-hand fights and mystery. With A Violent Night with David Harbor this December 2022 promises to be thriller and ruthless.