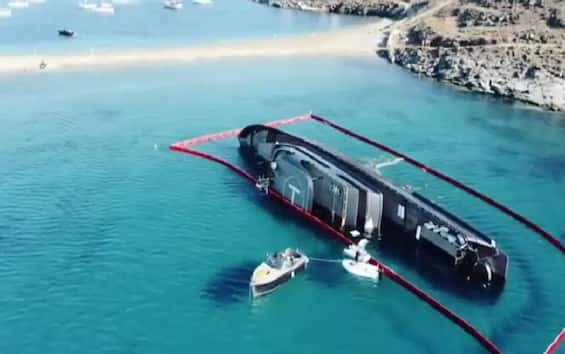 A 49-meter superyacht, owned by a Swiss businessman, ran aground after hitting rocks just 15 meters from Kolona Bay on the Greek island of Kythnos. According to the first reconstructions, the GPS with which the boat was equipped, called “007” in a clear homage to James Bond, was hit by a malfunction on the evening of 6 September and took it to the shore. All save the five passengers on board, who were rescued by the Greek coast guard. Watch the video.

Passengers said they first felt a strong impact and then saw the ship tilt more and more. The accident occurred around 11 pm on September 6 and from that moment more than 24 hours passed before the yacht stopped moving, lying horizontally on the surface of the water. The local police are working to clarify the causes of the accident. At the moment it seems that the navigator did not work properly and that the skipper approached the ship to the shore by touching the rocks at a point where the seabed was low.

Helipad and a suite

The “007” was developed in 2006 by the Turkish company Aegean Yachts and could accommodate up to 10 people thanks to the five internal cabins, one of which is a master suite. Equipped with a heliport and powered by two Carterpillar engines, its steel hull and aluminum superstructure did not prevent it from sinking almost halfway.