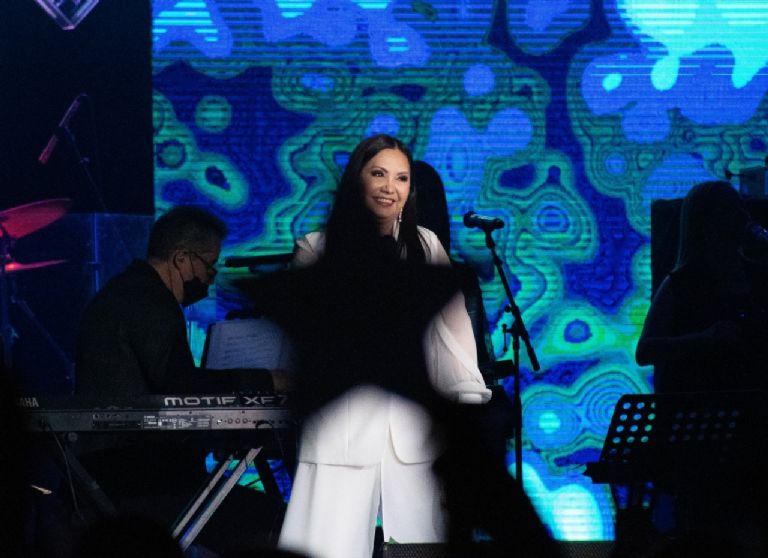 At 20:57 the first chords sounded. The people inside the Movistar shouted with desire. The lights went out while, hurrying and trotting, the people who were in line continued to enter.

Before the show began, upon entering the venue, the Movista Arena court was full of chairs on which the production left stars the size of the palm of your outstretched hand, made of white paper, printed with the legend: “RAISE IN EVIDENCE SONG N°2”. The chairs quickly filled up.

At 9 o’clock Ana Gabriel vocalized the first note of the concert dressed in impeccable white and wrapped in a mixture of darkness and smells of goats (popcorn) and floral perfumes with hints of vanilla. Unlike other artists, she did not make her audience wait for her and that is appreciated.

As announced by the stars arranged in the chairs, song number 2 was “Evidencias” and it goes without saying that the fans of the Moon of America sang. I, like hundreds of others, did it with my chest in one hand and emotion on my neck.

When the intensity was at its maximum, at the end of the song, Maria Guadalupe Araujo He took a moment to greet the public and talk with relaxation. She spoke proudly about the star of the walk of fame in Hollywood that they gave him in November 2021, pointing out that the way to achieve the realization of dreams is “love and discipline”.

Later, he said that Chile had given him many joys, many awards, adding: “I don’t know if Chile is mine or I am from Chile.” At that moment, Ana Gabriel saw a Venezuelan flag.

It is important to remember that the singer said in 2013 that will not give a concert in Venezuela while Nicolás Maduro continues to govern and that promise has been kept. After the recent show in Buenos Aires of the “For the love of you” tour (the same one that was presented in Santiago de Chile), the Mexican singer thanked the Venezuelans who have supported her since the beginning of her career, recalling the reasons why which has not been presented in the northern country.

Because of the flag that was raised among the public, the singer greeted the people of the red wine and a great noise was made that allowed to intuit that they were not a minority, but had a very important presence among the attendees.

The response of the Chilean public was immediate and a “CHI” was heard that did not resonate much.

Without giving more space to the matter, Ana Gabriel he transmuted his attention and directed it towards the posters in the public, one of them said: “When I grow up I want to be like you” he read with difficulty and apologized for the distance and the quality of his vision.

Already, by the time the third song began, the audience sat down, to get up intermittently every time the instruments let out the chords of one of the classics of his career that resonated in Chile during the nineties and two thousand.

I don’t know if it happens to you, but it happens to me that if I listen Ana Gabriel I can easily evoke the smell of flowers, wood and wax, of fresh fruit, of summer cooking. But I can also remember remote stories of spite for unrequited love of aunts and friends talking over a cigarette. In addition, the word “lover” resonates in my unconscious along with a sensation of crying, and the fact is that the work of Ana Gabriel It is like a concept that encompasses in itself a range of feelings associated with love and lack of love.

It is that this level of connection between the music and the story itself has that vibe or frequency of mysticism that makes a recital of this magnitude and quality look like a mass Like a religious ritual with its moments of reflection and catharsis.

One of the details you mentioned Ana GabrielAnd what was hard not to appreciate also as an attendee of the show, was the amount of young people that were present. The validity and transversality of the romanticism of the Mexican singer has been able to strike a chord with the new generations who have embraced her music as if it had been written yesterday.

alternately, Ana Gabriel He was talking with the public and throwing his hitazos, like someone who brings and puts photo albums on the family table. “My Talisman” was heard and over there a gentleman cried. Around here, an emotional woman wearing a charro hat put her hands to her chest when the maxicana performed “Until I met you.” When she played “El Cigarrillo”, how many of us didn’t see our mothers suffering, smoking in anguish and “remembering so many things that we thought we had forgotten”.

When she sang “La Reina”, the ladies were empowered and when Ana Gabriel finally made everyone vibrate with the song “Luna”… Imagine! I will only summarize it by saying that when Luna rang even my tears wet the Movistar floor.

Between songs, the artist he took the time to explain once again the controversy of why he did not allow and will not allow anyone to approach him on this tour. He argued his health, the covid, the future dates of his concert and that your work tool is your voice. It’s sensible.

In another moment of conversation, he read a sign that read “Conception” and mischievously surprisingly said: “I complained to Bizarro because they have not taken me to those cities” stating that his absence in other latitudes of the country was not due precisely to a lack of desire.

The time was also given before finishing thank each of the people who made the show possible. “From the lighting, the sound, the audiovisuals, even the people who cut the tickets, the drivers, the security, even the person who makes my tea.” Of course he also greeted his orchestra.

How not to love her after so much dedication, so much conscience, so much sympathy. After 2 hours and 10 minutes with a review of his entire discography, he had the luxury of singing “No me dice” by Rocío Durcal and shaking up an important part of our memories, with an encore included and two more songs.

Towards the end of the show, the public asked Friend. Instead, she delivered a bombshell: “Who like you”, “I don’t miss you” and ended with “Ay Amor”.

Being consistent with his explanations, he put on his mask and left the stage, leaving behind him the applause and gratitude of the public.

I cannot go unnoticed in this chronicle without first saying that I left Movistar without mascara on my eyes. Everything in the show was very well taken care of. The control table had 8 subscreens following each movement of Ana Gabriel. Each song had a graphic piece to perfectly set the live feeling of the public. The beautiful lighting.

After an experience like the one last night, it makes you want to thank Ana Gabriel and tell her “Who like you”. Because there are few artists who can stand on stage in such a forceful way and, at the same time, in such a way so humble

The only song left out of the show’s repertoire was “Friend“, that great song that he sings with Vikky Carr and that was requested by the galucha who, as a beautiful and improvised finale, ended up singing it a cappella once the Diva from Mexico disappeared from the stage and the attendees left the venue.

After the show, there were only people walking happily who at times took photos and bought the last souvenir trinkets at the exit.

Among the trees, a group of young people, who are no older than 25, asked who passed by the front. How was the show? and when it was my turn I told them “beautiful”. did you cry? said one of them and I replied “Obviously yes! and the girls clapped.

I left Parque O’higgins with that happiness that those concerts give you in which you leave hoarse from singing so much and with sore legs from not being able to leave your body glued to the chair. Each song was an explosion of memories, of faces that I thought had disappeared from memory, of landscapes that I left behind without knowing why. With the love of his songs and the heart beating nostalgia.

As I walked and got back into my routine and the Santiago night, I looked up at the sky and saw the huge crescent above the buildings. In the distance I heard behind me a handful of people still singing “You who know where he is going, illuminate him with your light.” Impossible not to smile again.

Where to see the tour “For the love of you by Ana Gabriel?

The “For the love of you” tour of Ana Gabriel continues in Santiago de Chile this Sunday, October 2 at Movistar Arena and then moves to Colombia where the Diva from Mexico will perform on October 7 in the Bogota Live Coliseum.

On Friday October 14th travels to the city of Pereira to perform at the Hernán Ramírez Villegas stadium.

Later the saturday 16 October the show will be held at the General Santander Stadium in Cúcuta and then in the city of Barranquilla at the Puerta de Oro on October 20.

The final show in Colombia will be held October 22 when Ana Gabriel appears before her audience in Medellín, at the Envigado Stadium.