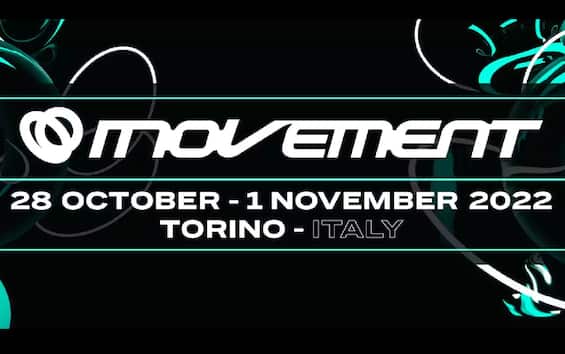 The Movement Torino Music Festival returns for its fifteenth edition, which from 28 October to 1 November will make all fans of this genre dance to the sound of electronics from chapeau.
On the bill there are many important names of the clubbing scene, with real sacred monsters of international electronics.

The sets will branch out into three main locations. At the Audiodrome Live Club you can listen to music and dance on October 28th, 29th and 31st. At the OGR Turin the appointment is for October 31st, while we get married at the Centralino Club on October 30th.
It starts on October 28 with Tini Gessler, Youniverse, Nicola Gavino and Riverside at the Audiodrome Live Club.
On the 29th it’s up to Cassie Raptor, Gandale, Sizing and Kliz, always in the same location.
Krystal Klear, LVPICA and Paul Lution live at the Centralino Club are expected on October 30th.
On October 31st the billboard is enriched with many sets: it is up to Mind Against, Fideles, Ae: ther and Youniverse, as well as 999999999 live, Gandalf, Marbøx and Sizing.
At the bottom of this article you will find the complete program.

The soundtrack of the event is available on Spotify

Also for this year’s edition, on Spotify you will find the Movement City Soundtrack, the soundtrack of the event. These are two playlists lasting two hours each, played in a loop in all the hotels in Turin that participate in the initiative. “Assohotel Confesercenti of Turin and its Province, Federalberghi Turin and the Hotel Tourist Group of the Industrial Union have already joined the initiative” he says Torino Today.

Movement Torino Music Festival comes after a sensational summer for Movement Entertainment. The 2022 edition of Kappa FuturFestival has in fact recorded a record of participation, gathering more than 90 thousand clubbers from all over the world in the city.

Below you will find the complete program of the 2022 Movement Torino Music Festival edition.