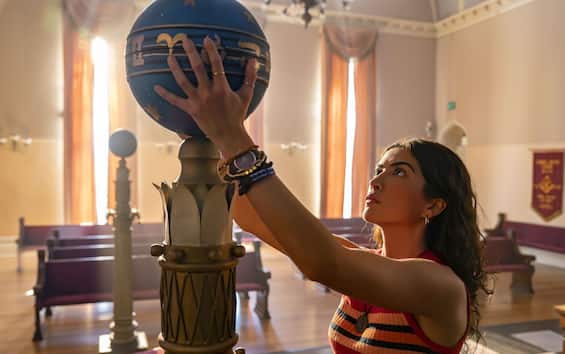 Remember the two films in the saga The Mystery of the Templars of 2004 and 2007 with Nicolas Cage? From 14 December is available on Disney + (also visible on Sky Q and via the app on the Now Smart Stick) a new tv series inspired by the cinematic adventure that invites the audience to a treasure hunt for all of North America. Instead of Ben Gates the the protagonist is the young Jess Valenzuela, played by Lisette Olivera, who lives with some friends in Baton Rouge and discovers a link between her family and a precious treasure. We have seen the first available episodes which will then be followed by a new one a week every Wednesday.

The Mystery of the Templars – The Series: a teen identity

The Mystery of the Templars – The series is definitely intended for a teenage audience with many cultural references to Gen Z, so older viewers may not relate and become engrossed in the story. Winking at Indiana Jones And tomb Raider, Jess leads the story in a mix of mystery and archeology, curious and intriguing but not very original. If you like the genre, however, the production is of quality and has all the credentials to respect the tradition, including some twists that pick up the rhythm of the narrative that occasionally tends to run aground.

Harvey Keitel is Peter Sadusky, a former FBI special agent considered unbalanced because he is convinced of the existence of plots and conspiracies. His meeting with the young protagonist Jess triggers the treasure hunt connected to the girl’s father who died some time ago. In the films with Nicolas Cage the Declaration of Independence of the United States played a fundamental role as a piece of the puzzle to be solved to reach the final solution, but in the series the game takes another direction. Catherine Zeta Jones wears the clothes of unscrupulous trader Billie Pearce antiquities hunting, main antagonist of Jess. Since the adventure is driven by teenagers, it is inevitable that romantic interests, friendships and dynamics typical of that age will come into play in the script, making the series more in line with a young adult audience.

An evening between puzzles, mysteries

The mysteries to solve they are not particularly compelling and cryptic and the characters are written without going too deep, but the special effects convince and give aesthetically captivating and dynamic shots. There is no shortage of action with clashes, chases and daring escapes, all seasoned with the charm of Indiana Jones archeology. The selling point, however, is definitely Lisette Olivera who, recalling Zendaya in appearance and charisma, drag the story with awareness and determinationbut also a pinch of light irony that doesn’t hurt. The Mystery of the Templars – The Series it is certainly a well-packaged entertainment product that can be appreciated by the target audience, however it lacks a bit of brilliance which we hope will come out in subsequent episodes.