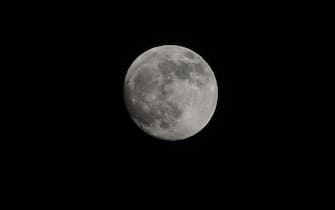 After the shooting stars of the night of San Lorenzo, the sky puts on another unmissable show: the appointment is for today, Sunday 22 August, with the night of the “Blue Moon”. A definition that has nothing to do with the color of our satellite, which will remain the same as always, but only a curiosity of the calendar, defined as the third full moon of a season that hosts four

Jupiter “in opposition”, the planet will be visible to the naked eye: that’s when to observe it

It is a event unusual but not uncommon, which is repeated approximately every two and a half years: the next will be in 2024

It is the night of the “blue moon”, the third full moon of the summer. VIDEO

Brilliant and spectacular, the moon on Sunday will light up the sky together of the two largest planets in the solar system, Jupiter and Saturn, which are in the period of maximum visibility

The trio can be observed with the naked eye from all over Italy, weather permitting, and can be admired as it parades over Rome and its monuments thanks to the live images of the Virtual Telescope

“On average we have one full Moon per month, as our satellite takes 29.5 days, or just under a month, to complete its cycle. For this reason – explains astrophysicist Gianluca Masi, head of the Virtual Telescope – it happens that, from time to time, we have 13 times the full Moon in a year”

And this is how, to indicate this “extra” moon, in the Anglo-Saxon world the name “Blue Moon”. In the 1930s, the Maine Farmers’ Almanac used this term to indicate in particular the third full moon of a season that hosts four.

This definition it was then misinterpreted in the 1940s by an author of Sky & Telescope magazine, who thus ended up spreading the definition of Blue Moon as the second full moon in the same month

Sunday will be a real Blue Moon, according to the original meaning of the term: it will be the third full moon of this summer 2021, which has already given us two full moons (June 24 and July 24). This summer there will also be a fourth full moon, right at the end of the season, on September 21st

“The Moon of 22 August – adds Paolo Volpini ofItalian Amateur Astronomers Union (Uai) – will allow even the less experienced to be able to more easily recognize the two giant planets in the sky, Jupiter and Saturn, which in the central hours of the night will culminate in the south: a few days after their opposition, they will appear larger and brighter than usual ”

To facilitate the observation of the two planets, even without the disturbance of the Moon, the UAI organizes the initiative “Nights of the giants”, With observational evenings throughout Italy scheduled for 27, 28 and 29 August