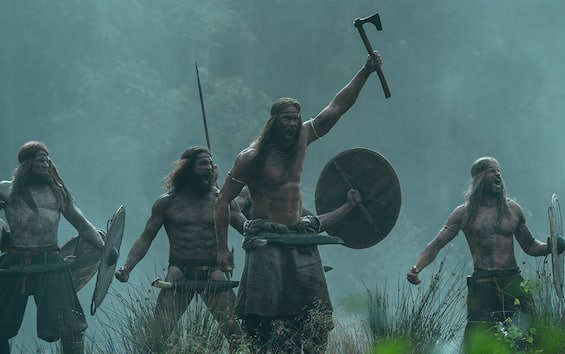 Released in cinemas last April 21, The Northman, now arrives on the screens of Sky Cinema. It is a ferocious and lysergic fresco that rewrites the stylistic features of Shakespeare’s tragedy with the wild and immortal force of myth. Fearless, like an intrepid hero, Robert Eggers (after The WitchAnd The Lighthouse) uses the camera like a sword to tackle a complex and layered film. Since the days of Orlando Furioso “The ladies, the cavaliers, the arms, the loves”, are risky to tell on the big screen. For this reason, the American director made use of the contribution of the Icelandic writer and poet Sjón, author of numerous lyrics to Björk’s songs, as well as screenwriter of that horror masterpiece that is Lamb (READ THE REVIEW). And the result is a film of extraordinary power in which poems are written in blood and history clings to legend in a hypnotic and fascinating dance, while warriors dream of Valhalla. But the hero’s journey can turn into a nightmare, if only the “Norns”, the Viking equivalent of the Latin Fates, weave the thread of destiny.

The Northmanthe Vikings as you’ve never seen them.

The Vikings have never been told so expertly as in “The Northman”. Neither on the big screen in films dedicated to Conan and other barbarian heroes, nor in TV series such as Vikings. Thus Norse myths meet Icelandic sagas, in this film in which the supernatural marries reality. Eggers shows all the brutality of a world dominated by violence and oppression, but at the same time capable of producing abstract and intricate art. Between elaborate costumes, complex codes of honor and justice, the Nordic epic is not populated only by brute beasts who, stunned by mead, howl at the moon. But this film is mainly inhabited by Shakespeare and his tragedies. The bard peeps at every scene. And it’s not just about Prince Hamlet and the skull of the unfortunate Yorick. From the fool of King Lear to the manipulations of Lady Macbeth, in every sequence of the film one breathes the Shakespearean inspiration. So The Northman is the demonstration that Peter Brook was right, when he wrote: “Shakespeare in his 36 texts, covers every aspect of human life, assimilating cosmic and metaphysical thoughts to the simple stories of everyday life. “It’s the power of film and mixing immortal masterpieces with the perpetual forces of nature. Wind, mud, rain, snow, earth, ice, ash and fire are characters who interact with humans, with their desires, their misfortunes. In short, the work is an epiphany of physical clashes and psychic conflicts, an anthology of battles between souls in constant struggle with themselves.

Sometimes dreams come true. Alexander Skarsgård had wanted to make a Viking film since 2008. On the other hand, if you are an actor with a body that is a war machine, 1.94 m tall, born in Stockholm, it is quite natural. But net of the overflowing physicality of the former vampire Eric of True Blood (moreover already shown in The legend of Tarzan) Alexander manages to convey all the pain of a prince aware that “the world is not his friend and neither are its laws.” Amleth is a mournful and unstable outcast who, despite possessing the strength of a bear and the agility of a wolf, will still fall victim to his own destiny. Because sometimes it’s sad to become who you are. Thus on the notes of the Tagelharpa, a lyre with strings made of horsehair, this tragedy made of bones, blood, teeth, and brain is consumed, while invoking Odin or waiting to be chosen by the Valcihirian virgin. Heaven can wait. Valhalla, however, is not.

Nicole Kidman, Anya Taylor-Joy, Björk, the women of The Northman

After the first season of Big Little Lies, Nicole Kidman reunited with Alexander Skarsgård in The Northman. Ça va sans dire, the Australian actress wears the crown of Queen Gudrun, Amleth’s parent, with unrivaled style. Wrapped in sumptuous costumes made by Linda Muir, Nicole restores all the ambiguity and mystery of a kidnapped and unhappy sovereign, wife and mother of a group of families in hell. The other main female figure in the film is Olga delle Betulle, the Slav who allies herself with Amleth for their mutual survival. For this role Eggers wanted very strongly Anya Taylor-Joy, with whom he had already worked in The Witch. And thanks to the superb performance of the actress (also outstanding in the underrated Last night in Soho) it is impossible not to be dazzled by this strong-willed figure in perpetual harmony with nature, despite living in slavery. Also unforgettable is the cameo of Björk who wears a headdress made of wheat and cowrie shells to hide her eyes. Only the Icelandic artist could be in the role of a blind 10th century shaman. Actor Claes Bang also found himself at home as Fjölnir, Amleth’s malevolent evil uncle, if only because he was born in Denmark and knew Shakespeare’s tragedy very well. Despite the brevity, the interpretations of Ethawn Hawke, in the role of King Aurvandil, and Willem Dafoe in those of the lysergic court jester are also centered.

The Northmanthe plot of the movie

Amleth is a young prince who lives in a prosperous kingdom in the North Atlantic near the Orkney Islands, ruled by his father, King Aurvandil (Ethan Hawke) and his mother, Queen Gudrún (Nicole Kidman). Returning from a journey, the king subjects his son to an initiation ritual which consolidates his position in the family, and makes him able to reign upon his death. After the ceremony, Aurvandil is assassinated in front of the young prince at the hands of his uncle Fjölnir (Claes Bang). To escape certain death, the 10-year-old boy leaves the island in a rowboat, vowing to avenge his father and save his mother, now in Fjölnir’s clutches. After twenty years. Amleth (Alexander Skarsgård), now swollen with rage, is part of a band of Viking berserkers from Sweden who raid the rivers of Eastern Europe.

As the ferocious berserkers drunkenly celebrate their raid, Amleth meets a seer (Björk) who reminds him of his destiny and his mission. Reinvigorated again, the man learns that Fjölnir runs a farm in Iceland. Disguised as a slave, Amleth sets off with other Slavs bound for Iceland, including Olga of the Birch Forest, with whom he forms a bond. Amleth and Olga go to work on Fjölnir’s farm together with other slaves. His uncle Fjölnir is raising Amleth’s half-brother Gunnar (Elliott Rose), along with another son, Thorír (Gustav Lindh). Making herself indispensable on the farm, Amleth waits for the right moment to implement his plan and avenge her father. But you always have to be very careful what you wish for