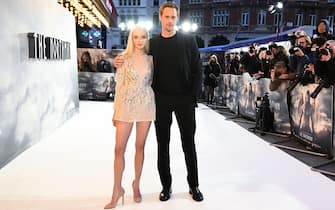 Anya Taylor-Joy and Alexander Skarsgård pose for photographers at the special premiére of The Northman in London, at the prestigious Odeon Luxe Leicester Square. Both are main characters of the awaited film

WATCH THE VIDEO: The Northman, the Italian trailer of the film

Robert Eggers’ third opera, of a historical-dramatic nature, centers on the story of the Viking prince Amleth, played by Swedish actor Alexander Skarsgård, engaged in the redemption of his kingdom and his family. Anya Taylor-Joy co-stars in the film as Olga

Anya Taylor-Joy enthusiastically and excitedly recounted her experience on the set. Completely immersed in nature and frost, the actress faced a demanding role also from a physical point of view

Anya Taylor-Joy, 25, is one of Hollywood’s most beloved young faces of recent seasons. Perfect in her new role, with long blonde hair and white skin, she stole the show at the première of The Northman in a white mini dress sparkling with Christian Dior Couture crystals

The Northman, the trailer of the film with Alexander Skarsgard and Nicole Kidman

Alexander Skarsgård worked hard to portray Prince Amleth, a character for whom he underwent a considerable physical transformation. The protagonist of The Northmanwith a beard and long hair and a rough face, he immediately attracted the attention of critics and viewers

Alexander Skarsgård: the best photos of the Swedish sex symbol

Skarsgård, born in 1976, boasts a long career both in cinema and on TV in which he has shown great talent by moving from one genre to another. Among his latest roles on TV, the miniseries The Stand where he plays the villain

The best films to see in April 2022 in streaming and at the cinema. PHOTO

The Northman has been heralded as a challenging film since the days of its making. In addition to Anya Taylor-Joy and Alexander Skarsgård, the cast also includes Ethan Hawke, Nicole Kidman, Willem Dafoe, Claes Bang and Björk

Nicole Kidman, the photo story of the Australian actress

At the evening alongside Anya Taylor-Joy was also her boyfriend, actor and musician Malcolm McRae

Another shot of the stars of The Northman before screening. The film will hit cinemas in Italy starting April 21