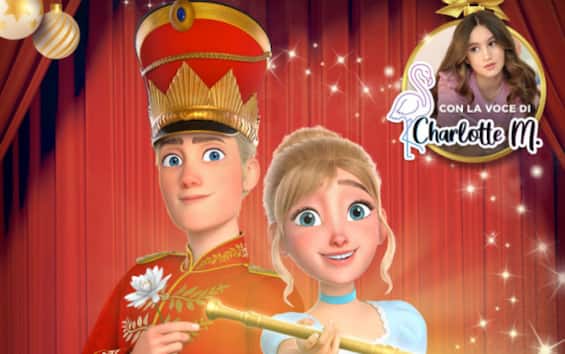 The great classic The nutcracker returns to the big screen on November 3 in the new animated version for the whole family The Nutcracker and the Magic Flutedirected by Vikor Glukhusininspired by the text of Alexandre Dumas and with the famous music by Pëtr Il’ič Tchaikovsky. An all-female adventure, full of twists, funny adventures, love and lots of magic and with the voice of the web star Charlotte M.which after the success achieved among peers on YouTube, Instagram and TikTok made her debut in the dubbing of the protagonist Marie.

The father of Marie, 17, has now been dead for a year. The girl hopes for the miracle of a positive turn in her life, but an unpleasant surprise from her lurks: to keep the house where she lives with her mother, Marie will be forced to marry the disgusting usurer. Mr. Ratterwho as a sign of proposal gives the young woman an ugly doll named Nutcracker. Distraught and desperate, Marie expresses a desire to be small and carefree again. The miracle happens: Marie becomes as small as her childhood toys, which magically come to life, and with her inseparable friends he embarks on a journey into the Land of Flowers to help the Prince Georgevictim of a spell that turned him into the Nutcracker, to find the Magic Flute and to regain his kingdom from the rule of the mice. Marie and the prince will learn to support each other and get to know each other, eventually loving each other madly. With them the shy and restless Red Beak will survive dangerous adventures and learn to overcome his fears by surprising everyone (including himself) for his unheard-of courage, while the stubborn and constructive Curl he will become more understanding and compassionate. The protagonists will join forces against Rodenthiasinister queen of the rat people and incarnation of evil, who to fulfill her desire to rule the world with her magical powers has banished King Edward into oblivion and transformed Prince George into the Nutcracker doll. The wicked sovereign wants to prepare the son Philippmean and arrogant chief of the royal palace guards, to become his heir and successor, but their plans fail and suffer a crushing defeat.

THE DOUBLE JOURNEY OF CHARLOTTE M.

Charlotte M., born Charlotte Moccia, gave the voice to the protagonist Marie. The very young Florentine content creator, born in 2008, made her debut in the world of the web in 2016 when she, with the help of her parents, uploaded a very first video on YouTube in which a siren was pretended, which in a very short time reached 200,000 views. Thanks to the distinctive trait of her authenticity, Charlotte soon became the idol of her peers throughout Italy not only for appearances on YouTube, but in 2017 also on Instagram and in 2018 on TikTok, where it reached around one million followers. In her videos, the web star tells of an ordinary and simple life, made up of small joys and disappointments of adolescence, including first loves, great friendships and quarrels. In the series Parents vs children And Friends vs enemies he experiences an ironic and hilarious vein and also collaborates with other renowned influencers. Precocious girl with a thousand talents and interests, after studying singing, acting and classical, modern and Latin dance, Charlotte made her debut on the biggest stage of the new millennium without however neglecting other worlds: in 2020 she published the novel A haunted college summerthe result of a study experience in England, and made his debut in the music scene with the viral hit I love youin 2021 he published the teenage novel An overseas love and the second single Buum buum (which in just three months got 1.5 million views) and in 2022 released the musical hit Best friend and the drawing book My secret life. A comic story. Bearer of the artistic values ​​of her time, from the songs of Blanco to the interpretations of Zendaya And Tom Holland up to the stories of the American writer Madeline Miller and the characters played by the actress Madelaine Petsch, Charlotte has collaborated with brands such as Pritt, Giochi Preziosi, Big Babol, Nike, Seven and Lelly Kelly to promote the everyday life of the new generations. Among the prizes obtained so far, the plaque for having carried the name of Serravalle Pistoiese around Italy (conferred in 2020 by his adopted municipality), and the Golden Creator Award for reaching one million subscribers on the Youtube channel (awarded by the video platform in 2021).