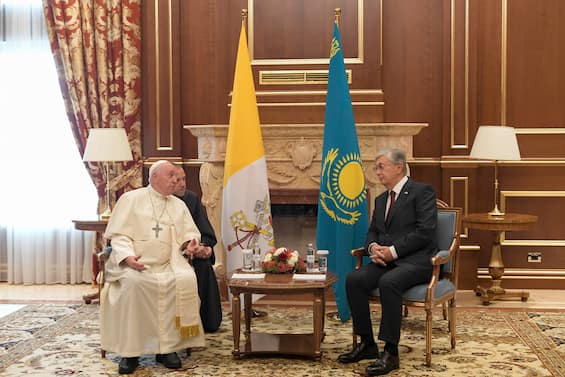 After arriving at Nur-Sultan International Airport and the official welcoming ceremony, Pope Francis gave the first speech of his three-day diplomatic trip to Kazakhstan to attend the Congress of Leaders of World and Traditional Religions. At the Qazaq Concert Hall auditorium, the Pontiff spoke to the country’s highest authorities, the diplomatic corps and civil society, calling himself a “pilgrim of peace”. “I implore an end to the insane war in Ukraine”, said the Holy Father, who reiterated the need to “intensify diplomatic efforts”. Then he praised the reform path undertaken by the local government, underlining the value of democracy. Finally, he did not spare himself a dig at politics: “Listen to the peoples to avoid the threat of populism”.

“Here John Paul II came to sow hope immediately after the tragic attacks of 2001. I come there in the course of the mad and tragic war originated by the invasion of Ukraine. I come to amplify the cry of many who implore peace, a way of development. essential for our globalized world. “Thus Francis on the conflict in what is in fact the second trip of a Pontiff to the Asian country.” The need to broaden the diplomatic commitment in favor of dialogue and encounter is increasingly pressing because those in the world who hold more power have more responsibility towards others “, added the Pope. Who specified:” We need leaders who, at the international level, allow peoples to understand each other and dialogue and generate a new spirit of Helsinki ‘, the will to strengthen multilateralism, to build a more stable and peaceful world “.

“Religious freedom via for civil coexistence”

“Religious freedom is the best channel for civil coexistence”. So Pope Francis continued his speech. “Rightly, the Constitution of Kazakhstan, in defining it as secular, provides for freedom of religion and belief. A healthy secularism, which recognizes the precious and irreplaceable role of religion and contrasts the extremism that corrodes it, represents – underlined the Pontiff – a condition essential for the fair treatment of every citizen, as well as to foster the sense of belonging to the country by all its ethnic, linguistic, cultural and religious components. “” Religions, in fact, while playing the irreplaceable role of researching and witnessing the Absolute, they need the freedom to express themselves “, Francis specified.

“Preserving the genius and vivacity of a people belongs above all to the civil authorities, first responsible for promoting the common good, and is implemented through support for democracy, which is the most suitable way for power to be translated into service in favor of whole people “. These are the statements of Francis, who then focused on the reforms in Kazakhstan: “I know that, especially in recent months, a democratization process has been launched aimed at strengthening the powers of Parliament and local authorities and, more generally, a greater distribution of power: this is a meritorious and demanding journey, certainly not a short one, which requires continuing towards the goal without looking back. “The Pontiff then focused in particular on the recent abolition of the death penalty in the country.” express appreciation for the affirmation of the value of human life and the right to hope for each individual. In addition to this, it is important to guarantee the freedom of thought, conscience and expression, to give space to the unique and equal role that everyone plays for the whole “, added the Pope. An applause from the Holy Father also went to the choice to renounce nuclear weapons: “Just thinking about the global commitment to peace, I express deep appreciation for this decision as well as for the development of energy and environmental policies focused on decarbonisation and investment in clean sources”.

“Politics listen to the peoples”

There was no lack of comment on the international political situation. “A truly democratic political style is the most effective response to possible extremisms, personalisms and populisms that threaten the stability and well-being of peoples”, said Pope Francis. He added: “Wherever democracy and modernization must not be relegated to proclamations but converge in a concrete service to citizens “. “A good policy is made up of listening to the people and responding to their legitimate needs, of constant involvement of civil society and of non-governmental and humanitarian organizations, of particular attention to workers, young people and the weakest groups”, he said. concluded the Pontiff.