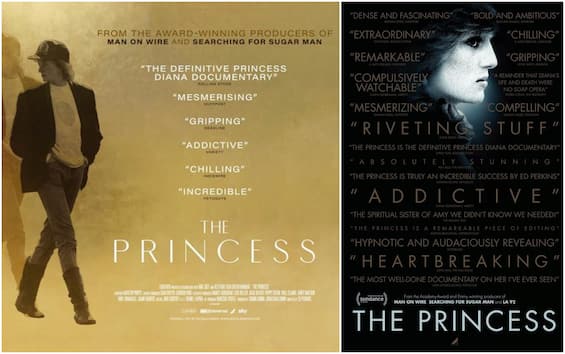 Observe Lady Diana as if we were there, looking at her a few steps away from her, seeing her change – between the Eighties and Nineties – through archive images and archive footage shot exclusively by paparazzi, newspapers and ordinary people. This is the experience that the documentary gives the viewer The Princessdirected by British Ed Perkins and out today, June 30, in the UK (in Italy it will be available on Sky Documentaries and Now starting August 31, the day Lady D died in Paris in 1997).

“Turn the camera on us”

The Princess tells the story of Lady D in the period from her marriage to Prince Charles to the car accident that took place in the gallery under the Ponte de l’Alma in Paris – in which Diana lost her life together with Dodi Al-Fayed -, up to at the funeral that kept the world glued to the TV while sons William and Harry followed their mother’s coffin. But not only that: Ed Perkins’ work makes it possible for the viewer to see through the life of Lady Diana what were the feelings and attitudes of the media, the royal family and the public towards her. “What interested me – explained Perkins – was to give an image of Diana’s personality, paradoxically less mediated, despite being one of the most mediatic people ever, in such a way as to leave the public who sees her response, a memory of her. , his personal space for this story “. A documentary, the director told a The Corriere della Sera, “Designed in such a way that it would allow us to ‘turn the camera around us’, on our relationship with the monarchy, with our history, even with celebrities. We have not yet come to terms with all this. There have been events that have happened in the Royal family in recent years in which the echo of Diana’s story was caught. What Harry said after moving overseas I think makes one think: he feared that what happened to his mother could have happened to his wife (Meghan Markle, ed), to his family “.

Perkins’ documentary shows us the evolution of Lady Diana, a parable of what for the British people was “The People Queen”, locked in an unhappy marriage, always in the crosshairs of the media, a too modern woman who was fighting an already lost battle with an institution that did not want to abandon its beliefs and traditions and that lived its presence like that of a foreign body. The archive footage allows you to perfectly capture some looks and body language of Lady D and the people around her, as she transforms from a 19-year-old newlywed into an icon of humanitarian battles, to a fierce single woman, an icon of style, a character who uses those media that torment her so much to promote her battles. “We understood that drawing only on archival material without any narrative voice, no interpretation, allowed us to face Diana in a new way – says Perkins to The Corriere della Sera – So I have read everything that has been written about her, I have spoken with people who have known her or have come in contact with her. And then I looked for international as well as regional archival sources here in the UK. And in the end, we spotted thousands of materials, being the most filmed and photographed person for two decades. I looked at 8-12 hours of raw archive every day looking for those ‘subtle little moments’, those little revealing moments of the real princess ”.

The relationship with the monarchy

Central to the documentary is not only Diana, but also the relationship that citizens have with the British monarchy. “Diana’s death drew a line in the relationship between the people and the monarchy. This film is about Diana, but through Diana it is about our perception of the Crown, and therefore about the underlying debate that runs in British society today “, explains Perkins to The Corriere della Sera. When Lady Diana died in Paris, the director was 11 years old: “I remember my parents who entered my room crying, telling me what had happened – she says – Neither I nor they had known her, we later witnessed this mourning scene national team with people who poured into the streets as if a tragedy had occurred involving a family member, a person extremely close to them. “” I confess – concludes the director – that at that age I was not saddened, but I remember feeling confused because I didn’t understand why this was all happening. “