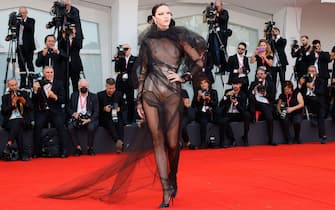 Since the opening night, the Venice Film Festival has offered a great show also in terms of the style of the celebrities present. Among the most talked about, Mariacarla Boscono, who showed off a Jean Paul Gaultier by Glenn Martens creation of great effect

Mostra del Cinema, the live broadcast of the day

The supermodel, muse of many creatives, with the support of her stylistic team led by Ramona Tabita, wore an impalpable and fluffy dress that included bare breasts, visible in transparency. Also on view is the guêpière, an unmistakable sign of the French brand

Even Greta Ferro could not resist the nude look for her Armani Privé dress, a very elegant archival garment that covers only the right points in the upper part

Veronica Ferraro instead relied on the skilled hands of Tom Ford, master of intriguing and glamorous looks. Her velvet and tulle dress is perfect for enhancing the feminine silhouette

The report cards of the looks of the Venice Film Festival

Laura Chiatti left everyone breathless in her custom-made Dolce and Gabbana dress, a shiny mesh corset that showcases the actress’s slender legs, sexy and sparkling in the light of flashes and spotlights

Not even Julianne Moore escaped the Venetian trend and in her Valentino couture dress with hood, entirely embroidered with sequins, she showed off tops and culottes showing unrivaled class

WATCH THE VIDEO: The most beautiful dresses seen at the Venice Film Festival 2022

Transparency and see-through look also for Bianca Brandolini D’Adda who for two occasions wore haute couture garments in the two materials that best embody this trend. In lace, the one by Maison Valentino; in tulle, the one by Giambattista Valli

Not just black, lace and tulle, when it comes to being seductive with transparencies: Melissa Satta ranked among the sexiest on the Venice 79 red carpet with her Alberta Ferretti chiffon dress. Fluttering, very light and with deep slits, the dress left little room for imagination even in the upper part

Venice 79, the report cards for the looks on the red carpet of the fourth evening. PHOTO

But transparencies, even when they don’t reveal too many inches of skin, remain one of the best tricks to make a great evening dress unique. Leonie Hanne wore a very rich Alberta Ferretti creation whose 3D decor is applied on a bodice with a nude vocation

Venice 79, the report cards to the looks on the red carpet of the sixth evening. PHOTO

Again Alberta Ferretti, one of the most requested designers for this type of red carpet, has signed the dress by Nieves Álvarez, transparent on the shoulders, almost a stretch of the imagination of the Great Gatsby by Fitzgerald

Venezia 79, the report cards of the looks of the seventh evening. PHOTO

Skirt with lace inserts that leave the legs exposed even for Tessa Thompson who for this edition in which she is sworn is having fun with fashion interpreting a different style every day. Here she is in Jason Wu for a press appointment. Her styling is by the Waiman + Micah duo

Najwa Nimri expressed her verve on the red carpet of The Whale with a really whimsical (and very transparent) look curated by celebrity stylist Freddy Alonso. To admire the tulle jacket with ruffles signed Act N ° 1 which has been combined with Jimmy Choo pumps and Bulgari jewels

Queen of the Don’t Worry Darling film, Florence Pugh also ranks among the best interpreters of the transparency trend. The dress of her Maison Valentino lends itself particularly to the attention of photographers

The Valentino creation, presented in the fashion show last July, also allows you to appreciate the accessories that, normally, remain hidden by the long red carpet dresses

Giulia Salemi also dares with transparencies without exaggerating. For her, the nude effect is muted by the pastel colors of a Georges Hobeika creation

Surprisingly, Phoebe Waller-Bridge also shows a little more on the red carpet than she is used to normally. Her choice of the embellished tulle under-jacket for the cream-colored suit of The Banshees Of Inisherin premiere amazes fans but looks absolutely in her style