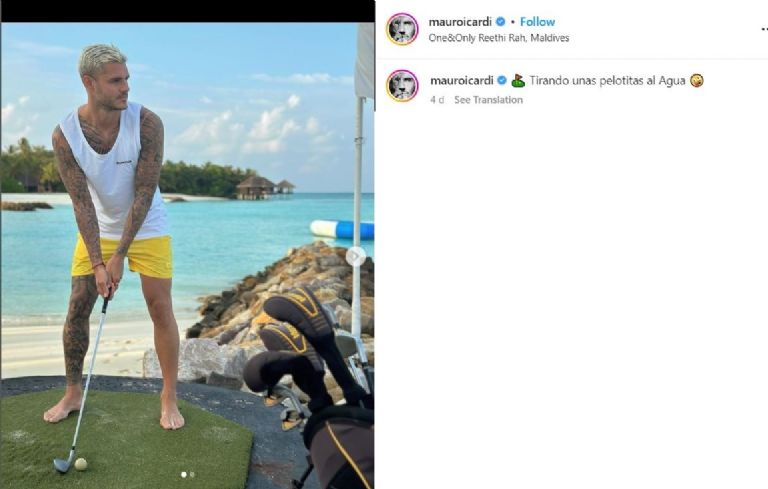 the couple of Wanda Nara Y Mauro Icardi always gives a lot of gossip material. After a particularly contentious year, the soccer player and his manager, who happens to be his wife, are back together. Although they have not confirmed anything, they could be seen together in the first instance going to the court and now in the Maldives.

Gone are the rumors of the love affair of Wanda Nara next to L-ghant. Sometimes the public wonders if all the controversies between them are the product of an almost soap opera script but on social networks. The truth is that they always manage to be at the center of the scene with their eccentric and questionable attitudes.

Now the eye went from being placed on the couple bond between Wanda Y Mauro, to the carefree actions of the current striker for Galatasaray of Turkey. Both are enjoying a restful vacation in the Maldives Islands. And although the photos together were made to wait, the recreational activities they carry out quickly went up.

In one of those posts, Mauro shared a photo that generated a lot of hate among Instagram users. He is seen playing golf, but instead of being on a suitable course, he was playing facing the sea. icardiaccompanied the photo with an unfortunate description: “Throwing balls into the water,” Mauro wrote.

It did not take long for the comments to arrive trying to make reconsider icardi. “You contaminate the water”, “Take care of the planet” his followers began to tell him, questioning his actions that generate a great environmental impact. However, there was no response about the player. Who continued to enjoy his favorite destiny as he confessed in his stories, and alluded to the presence of Wanda Nara in the place. A few hours ago he uploaded the first photo together in the place. Although it is the second time this year that they have traveled to this destination, this time they did it in reconciliation mode since they went without their children.