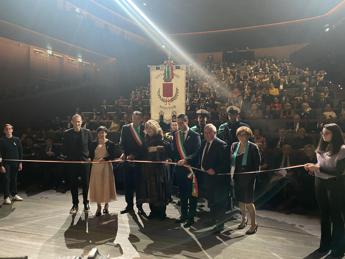 From cosmetics factory to theatre, from industrial pole to cultural centre: this is the extraordinary evolution of the space that now houses the new Roberto De Silva Civic Theater in Rho, inaugurated on 25 November and named after the man who founded that factory in the 1970s. Died in 2012, De Silva was a chemist, entrepreneur and husband of Diana Bracco, president of Bracco group, the chemical-pharmaceutical multinational which this year celebrates its 95th anniversary. To remember her husband and promote culture and the rediscovery of live entertainment, Diana Bracco wanted to redevelop the area and give the Municipality of Rho a new theatre.


“This ‘magic box’ – commented Diana Bracco – it stands where the Diana De Silva Cosmetiques, the perfume and fragrance factory led by my husband, once stood. As a lover of culture, he would have been enthusiastic about the project and would have loved this theatre. What makes the new cultural center of Rho even more special – continued the president of the Bracco Group – is the time in which it was conceived and created: in a historic moment in which theaters are closing, we have decided to go against the trend and investing in culture, giving the citizens of Rho a new, beautiful theatre”.

The Municipality of Rho officially received the keys to the theater on 28 July and immediately began intense work with the Fondazione Teatro Civico Rho, established on 16 May of the same year, and with Csbno, a special company of the Municipalities of North West Milan which deals with cultural activities, to start the artistic programming and open the theater.

“This project was born from a dream of the Rhodens, who wanted a theatre, a place of culture, where to build the future of the community – has explained Andrew Orlandi, mayor of Rho who succeeded Pietro Romano, who first undertook to build the theater – We are therefore happy and proud of this beautiful meeting place, relationship and knowledge. The union of intents between the Municipality of Rho and Dr. Bracco has made it possible for our fellow citizens’ dreams to come true”.

Located in Piazza Enzo Jannacci and capable of accommodating over 600 people, the Roberto De Silva Civic Theater was built by Bracco Real Estate and inaugurated in the presence of local and regional authorities, Diana Bracco and Giovanni Sollima, cellist and composer. The artist, who had already performed on the construction site of what is now the De Silva in 2019, ‘closes the circle’ with his inaugural performance, which took place following the cutting of the ribbon, which opened the doors of the Theater.

The inauguration of the De Silva Theater – whose direction has been entrusted to the president of the Fiorenzo Grassi Foundation, former founder and director of the Elfo Puccini Theater in the Lombard capital – lasts until 31 December: the inaugural festival in fact provides for a varied calendar, scheduled until 31 Decemberin which dance performances and concerts intertwine with prose, with particular attention paid to emerging artists linked to the territory.

“This is a period change for the city of Rho – he commented Valentina GiroCouncilor for Culture of the Municipality of Rho – Finally we have a metropolitan-level theater, beautiful and capable of hosting many people. It is a place of culture that looks to the territory – and therefore to the many music and dance realities and associations of Rho – but which also aims to offer a wide-ranging program. And in this sense, the Rho Civic Theater Foundation is doing a great job. Choosing to invest in the construction of a theater in times of pandemic was certainly a decision against the trend, but I believe that for this reason too De Silva represents a great message of trust and hope for the future”.

Also present at the inauguration ceremony was the Councilor for Culture of the Lombardy Region, Stephen Bruno Galliwho explained the importance of virtuous collaboration between the public and private sectors: “This wonderful theater is testament to the success of the public-private partnership. Think – said the regional councilor – that 54% of investments in culture in Lombardy come from the private sector and in the two years of the pandemic these investments have even increased, going from 187 million euros to 213, an incredible figure if we take into account of the difficulties that companies had to face during the health emergency”.