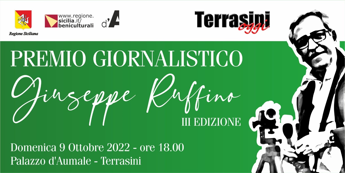 The third edition of the “Giuseppe Ruffino” journalistic prize will be held on Sunday 9 October, at 6.00 pm, at Palazzo d’Aumale, in Terrasini (Palermo). The award is awarded every year to journalists and communications staff who have distinguished themselves for their professionalism. Conceived in 2020, the award is dedicated to the memory of Giuseppe Ruffino, a point of reference in the local cultural and journalistic world and founder of the newspaper “Terrasini Oggi”, who passed away on 25 September 2019.


To receive the award this year will be the journalist Fulvio Viviano, well-known face of the TV, correspondent of SkyTg24 from Sicily. Author of several novels, Viviano tells the story of Sicily from the microphones of the news of Sky since 2003, after having collaborated with the Giornale di Sicilia and Agi (Italian news agency). Correspondent for seven years of the newspaper Il Tempo, he also has a radio experience (RDS and Capital). He followed the most important mafia trials and was sent to Lebanon and Malta.

New in the 2022 edition is the “Pungolin” award for satire. Pungolin was the pseudonym used by the authors of the column “Ridiamoci su” of the periodical Terrasini Oggi since its first printed edition, and then also found space in the web version of the newspaper edited by Giuseppe Ruffino. The award will be received by the editorial staff of the satirical site Lor’a – Irriverent Daily, founded in 2020 by Andrea Tuttoilmondo and Franco Cascio. Lor’a – a clear tribute to the historic Palermo newspaper – tells through the critical and ruthless eye of satire fashions and characters, politics and customs, passing from local to national news. He received the Mi.Gi Press Award.