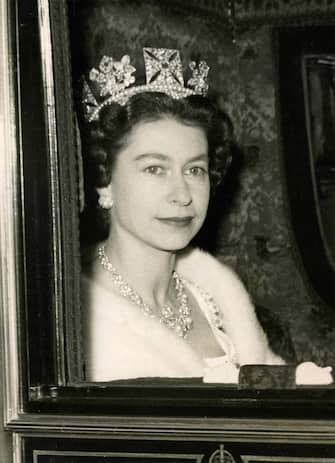 It was June 2, 1953, exactly 68 years ago, when the United Kingdom stopped to attend the coronation of Queen Elizabeth II. A sumptuous ceremony was staged in Westminster Abbey, the first of its kind to be shown on TV

The queen took office as early as February 6, 1952 after the sudden death of her father. However, more than a year passed between the accession to the throne and the coronation ceremony, to respect the mourning for the death of the king.

The Crown 5, the British royal family could sue Netflix

On the day of her coronation, Elizabeth wore a Norman Hartnell dress in white satin with short sleeves, sweetheart neckline and a bell skirt; the symbols of the United Kingdom and the Commonwealth countries are embroidered in gold, silver and pearls. Six bridesmaids then put on her a red velvet cloak, edged with ermine, 5 and a half meters long

The secrets of the Royal family, Queen Elizabeth between politics and power

The Queen with her husband, Prince Philip

Fashion, this is how royalty dress. PHOTO

Philip and Elizabeth, distant third cousins, both great-great-grandchildren of Queen Victoria, met for the first time in 1934 and then again three years later. But it is in the summer of 1939, when Elisabetta was just 13, that sparked off

Philip and the Queen met when she was 13, and married at 21. The official engagement was announced to Great Britain on 10 July 1947.

The Royals, the last two episodes on Lady D, Fergie and Andrew. PHOTO

About seventy-three years ago, the marriage between the young Elizabeth and Prince Philip of Greece and Denmark was announced

Although with a limited role in the use of power from conventions and public opinion, Queen Elizabeth continues to exercise three essential rights: the right to be consulted, the right to advise and the right to warn.

The Royals, from the Queen’s Ministers to Lady Diana mother. THE PHOTOS

The queen also has the right to approve or reject bills: if she approves them they automatically become law. The last rejected dates back to 1707

The Royals, the story of Princess Margaret and George VI

The queen still retains the title, also formal, of supreme governor of the Anglican Church

Uk, Queen Elizabeth hospitalized one night in hospital: how is she really