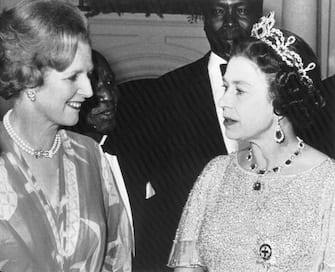 Although with a limited role in’use of power by conventions and by’public opinion, Queen Elizabeth continues to exercise three essential rights: the right to be consulted, the right to advise and the right to warn

The Crown 5, the British royal family could sue Netflix

In the photo Margaret Thatcher (Former Prime Minister of the United Kingdom) with whom the queen never had an easy and relaxed relationship.

Fashion, this is how royalty dress. PHOTO

Winston Churchill, a father figure of Queen Elizabeth II, shared with her a passion for horses, racing and polo

One of the main duties of the Queen d’England is there’weekly meeting with the British Prime Minister. In the photo, a black and white portrait of Wilson

After the Conservatives were wiped out in 1997, Labor leader Tony Blair (pictured with the Queen) was determined to lead Britain into the 21st century and modernize what he saw as antiquated institutions such as the government’s relationship to the monarchy.