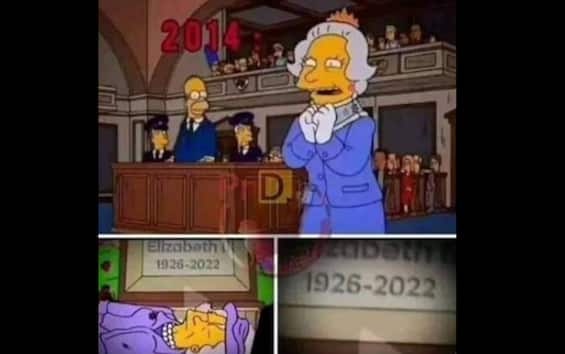 In the last few hours, the news has circulated on the net concerning the umpteenth forecast of an event of public interest by the most famous animated television series on Earth, namely The Simpsons.

An image of Queen Elizabeth II in the coffin with two precise dates imprinted, namely that of birth (1926) and that of death (2022), is making the rounds of the web. However, to dispel the myth of Matt Groening “haruspice de ‘noantri” comes David Puente, a journalist specialized in fact-checking in the editorial board of «Open.online» and owner of the famous blog «Il cacciatore di bufale».

The proverbial buffalo hunter has deconstructed the news relating to the alleged forecast of The Simpsons about the date of death of the English sovereign, coming to the conclusion that we are facing yet another fake news.

“This is a photomontage,” explains Puente. What the vade-retro-fake-news specialist reconstructs in an article just published on Open.online is that someone used an old hoax related to Donald Trump to create a new one, also this artifact and linked to the recent number one news of all the newspapers in the world: the death of the English sovereign.

“In the roundup of falsehoods and decontextualized images spread about the death of Queen Elizabeth II, the Simpsons, always protagonists of phantom predictions, could not be missing”, these are the introductory words of David Puente’s article.

You can look at the fake image in the post you find at the bottom of this article.

The reconstruction of the genesis of the buffalo

According to the image spread through social networks, the episode in question dates back to 2014, however a research conducted by Puente reveals that there are no episodes of the series with the scene depicted in the numerous posts that are flourishing on social networks in these hours. .
An image of Queen Elizabeth II in Springfield’s version (yellow like the other inhabitants, in short) lying in a coffin with the date of 2022 is science fiction, in short.

It is a photomontage created using another false image, the one released in 2017 with the then protagonist Donald Trump, a fake that “seems to come from the 4chan forum”, underlines David Puente.

The spread of the false image

The image bears the words “The Simpsons had foreseen this too”, a phrase that we can now consider a real refrain. In short, there is no news and current affairs event that cannot be found in the series created by Matt Groening. However, many of those findings are artifacts.

The image of Queen Elizabeth in the coffin features a logo, that of the community known as Pastoralism Never Dieshowever Puente points out that the same scenes are also shot in a video that circulates in some Telegram channels such as Info Neshcoming from a Tiktok account that is now removed (but has been taken over by other accounts).
“We do not find any episode of The Simpsonsstarring the Queen, where the date of 2022 is ‘predicted’ or in any case the representation of the funeral “, points out the expert on the in-depth study just published on Open.

The conclusions reached by David Puente

What led the buffalo hunter to hunt buffalo, in fact, is the following research.
“Searching in English for« Simpson coffin »we find several images of the protagonists of the animated series depicted together with a coffin. The Google search engine led us to the BuzzFeed article about the hoax circulated in 2017 claiming that the Simpsons predicted Donald’s death. As we can see, the image is identical with regards to the coffin and the flowers in the background ”, writes Puente su Open.

As already reported, the image of Trump is also a fake, “probably coming from the 4chan forum as explained in a video of the Mexican Youtube channel Badabun”, adds the expert.
So the buffalo hunter concludes that that image does not prove that the Simpsons predicted the date of 2022 as that of the death of Queen Elizabeth II. However, that image proves one thing: it is yet another proof that strengthens the increasingly rampant trend, that of resuming and disseminating fake news. At the base of this new hoax, in fact, there is that of five years ago relating to the death of Donald Trump, in a vicious circle of continuous disinformation. This type of fake news also snakes around the net with incredible speed because the genet really likes to believe these unlikely but still tempting stories, just like the so-called urban legends. Why is the story of the night of sex spent with a stranger with the red lipstick “welcome to the world of AIDS” rediscovered on the bathroom mirror hard to die? Because it leverages our innermost fears and manages to show them in a convincing way, dramatizing them and explaining them with a sort of modern day Aesop’s fable. But Aesop’s fables were proposed as fables, in fact, while these are fake news that must be fought because they reinforce a huge scourge of our society: disinformation.

Below we show you one of the many posts that are blossoming on social networks spreading this fake news of The Simpsons once again as fortune tellers.