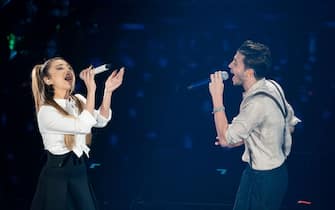 Ana Mena is expected on the Ariston stage from next Tuesday 1 to Saturday 5 February, with the song Two hundred thousand hours. For her it is the first time at the Sanremo Festival as the Big of the kermesse. However, fans will remember her performance as a guest of Riki – Riccardo Marcuzzo – during Sanremo 2020

WATCH THE VIDEO: Ana Mena, the most famous songs

On the evening of Friday 4 February, dedicated to the covers of the 60s, 70s, 80s and 90s, Ana Mena will perform in a medley surprise accompanied by a friend and colleague Rocco Huntwith which he has already produced many hits

Born in 1997, originally from Estepona, Ana Mena Rojas he achieved popularity in 2006 (at just 9 years old), after winning the twelfth edition of the Veo Veo Awards. However, her career took off ultimately, when the singer also took on the role of a very good one actress for the Spanish series Marisol, the película

A passion, that for the music, that Ana Mena therefore cultivates from an early age, also accompanied by the influence of her parents

In 2007, after making herself known at the Spanish Veo Veo Awards, Ana Mena released her first single entitled Esta es mi illusión. It was followed by several participations in television series and films for Spanish and international cinema. His most important appearance? The one in the film The skin I live in by the great Pedro Almodóvar, for whom she also took care of the soundtrack recording the piece Voy to shine (2011)

Although so far, Ana Mena has only one studio album under her belt – Index (2018) – there are numerous successful singles and collaborations. First of all the song No soy como tú crees, which in 2016 quickly climbed the best streaming charts

In Italy he has become a well-known face quite recently, when over the last few seasons, his name is increasingly associated with successful features such as One step away from the moon And A kiss suddenly with Rocco Hunt, Once again And It is not valid in the summer with Fred De Palma or Sol y mar next to Federico Rossi

On November 25, 2021, Ana Mena releases the single Ligera musicSpanish version of the Sanremo 2021 hit Light music written and performed by the duo Colapesce and Dimartino

Ana Mena, the cover in Spanish of Musica Leggissima has been released

Ana Mena is very active on social, especially on Instagram where his profile has almost 1 million followers. What does it share? Moments of his daily life and his career, but also important ones news from Sanremo 2022

Sanremo 2022, Amadeus on Fiorello: the room opposite mine booked for him