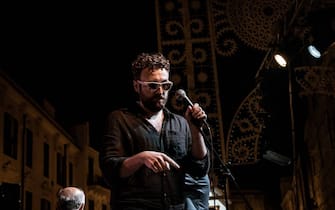 Sanremo, says D’Argen D’Amico, will be the unique opportunity to present what he defines as a real one hymn to dance music. Where do you dance it is written and interpreted to make everyone present at the Ariston dance and the millions of viewers connected from home. “Dance to stay afloat. In Mediterranean nightmares. What a bad ending postcards. Our story that goes to be blessed”

WATCH THE VIDEO: Dargen D’amico, 8 curiosities about the singer

On the evening of Friday 4 February, dedicated to covers and duets of national and international music from the 60s, 70s, 80s and 90s, Dargen D’Amico sings Doll by Patty Pravo

Dargen D’Amico is just the pseudonym of one of the most influential “rap” pens in the Milanese hinterland (where he was born) and in all of Italy. His true name is Jacopo Matteo Luca D’Amico and is 41 years old

It is Dargen himself who does not categorize himself into a well-defined musical genre with clear boundaries. The word with which he loves to define himself is “cantautorap“Demonstrating the rich mix of rap, songwriting but also experience as a producer that brings in all his lyrics and music

A passion, that for music and introspective writing, which accompanies D’Amico since the teenage years, when he begins to try his hand at freestyle challenges on the streets and in the clubs of Milan

Precisely on those occasions he will become aware of friends and colleagues Guè And Jake The Fury with which he founded the group Sacred Schools. In 1999 their only album “MC’s al cubo”, before Guè and Jake founded Club Dogo together with Don Joe

With the dissolution of Sacre Scuole, Dargen D’Amico continues with his solo career, releasing his debut album in 2006 Music without musicians. A unique occasion in which one begins to notice his strong songwriting vein, often associated with the influences of artists such as Lucio Dalla, Franco Battiato and Enzo Jannacci

There are many collaborations signed by Dargen D’Amico with the most important exponents of the Italian rap and hip hop scene. Not only Guè and Jake La Furia, but also Fabri Fibra with which he duets in the piece Insensitive taken from the famous album Counterculture of the rapper from the Marche region. In 2011 he collaborates again with Fibra on the remix of Except you. He also collaborates with, among others Marracash And Grudge in the song The Albatross, with Fedez, J-Ax and the producers Don Joe And Shablo

Sanremo Giovani 2021, Yuman, Tananai and Matteo Romano are the winners

Dargen D’Amico says that, together with the Milanese DJ Nic Sarno, he proposed to create a new musical genre (in 2011) with the name Balerasteppin, able to reinterpret famous texts of Italian and international songwriting in an electronic and dance key

In 2013 the rapper is part of the jury of the Sanremo Area, the competition aimed at young people who wish to participate in the Festival