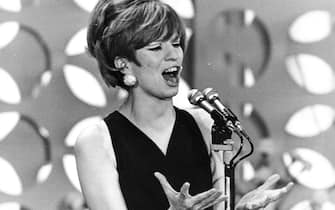 Iva Zanicchi, already protagonist of the main singing events of the time, wins the Sanremo Festival with the song “Don’t think about me” presented together with Claudio Villa.

The year of the Sanremo Festival number nineteen becomes a legendary moment in the career of Zanicchi who takes home the trophy with “Zingara” presented with Bobby Solo. The song becomes a hit that stands the test of time.

Sanremo 2022, Iva Zanicchi with I want to love you: the text

With the victory of the twenty-four edition of the Sanremo Festival with “Hello dear, how are you?”, Iva Zanicchi becomes the woman who has won the festival several times, a record that the artist still holds today.

The return of Zanicchi to Ariston, after competing previously in 2003, is with the song “I want you without love”, a song that did not pass the first round of eliminations foreseen by the regulation of that year.

Iva Zanicchi, how the singer from Zingara has changed over the years. PHOTO

With her multiform career that ranges from song, to politics, to cinema, to TV, Iva Zanicchi is one of the most famous faces of the national show. With Mina, Milva and Orietta Berti she formed the quadrilateral of the most representative female voices of Italian music between the Sixties and Seventies.

Presenter of some of the most popular commercial TV programs between the Eighties and Nineties, Zanicchi, fun and volcanic, continues to appear on the small screen as a guest and commentator and her presence is always much appreciated by the public.

Iva Zanicchi, born in 1940, certainly represents an example of success but also of strength and perseverance, characteristics that have allowed her to continue to exhibit her talent over the decades. In the musical field alone, since 1963, he has released 29 albums, 70 singles, 12 EPs and numerous collections.

Iva Zanicchi’s love for TV continues over time: at the age of eighty-two, the singer accepts the challenge of co-hosting Le Iene alongside Nicola Savino for a special evening topped off by a monologue in which she proudly recounts her long professional path.

Iva Zanicchi at Le Iene: “I’m still here and I’m not going to give up”

Posing for an Instagram post with the 1974 award, Zanicchi explains that the other two trophies have been stolen from her. As always, he jokes: “I’m going back to Sanremo to get back at least one!”

After the Sanremo adventure, Iva Zanicchi is ready to return to the music market with the album “Gargana”, a word from her dialect that means voice. For the summer, the artist is thinking of a tour but there are still no confirmations in this sense.