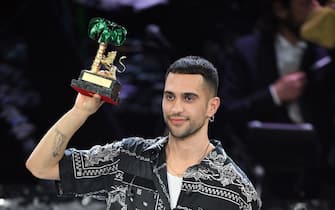 For Mahmood, pseudonym of Alessandro Mahmoud is the second time at the well-known Ligurian Festival, after the exploit of 2019 where he not only won the Sanremo Giovani circuit, but also the Big race with his song “Money“.

A year in which the then Artistic Director of the show, Claudio Baglioni, chose to have the two most voted young people participate in the same competition as the great stars of Italian music.

Sanremo 2022, Mahmood and Blanco with Shivers: the text

During the evening dedicated to the covers, Mahmood duet on the notes of “Soldi” together with the rapper Guè.

Thanks to the victory of Sanremo 2019, Mahmood removed the pass for theEurovision Song Contest of Tel Aviv.

Born in 1992 in Milan, to a Sardinian mother and an Egyptian father, Mahmood lived for years on the outskirts of the metropolis before trying the leap and making that passion for singing that he carried with him since he was a child, a real job.

In fact, his career began long before the victory in Sanremo. To be precise in 2012, when he participated in the sixth edition of the musical talent show “X-Factor“. In the “Under Men” team, captained in that edition by Simona Ventura, unfortunately he cannot go beyond the third live episode.

From that moment Mahmood began to write and produce his own pieces (but also for other artists), reinforcing the sense of the pun that lies behind his name. Mahmood it would in fact be the perfect union of the singer’s surname (Mahmoud) and the English expression my mood (in Italian, my state of mind), which represents his project to bring his personal story and his way of being inside the pieces.

Mahmood talks about his adolescence in “Rubini”, the single with Elisa

Before the well-known 2019 edition, Mahmood competed on the circuit New Proposals of Sanremo in 2016, finishing only fourth with the song “Forget”, Behind other very important names that would soon become great stars of Italian music. In fact, Francesco Gabbani won, followed by Ermal Meta in third place and Irama in fifth.

At the moment, Mahmood has only released two studio albums: “Wasted Youth“(2019) and the recent”Ghettolimpo”(2021), which earned the singer many certifications, thanks to numerous singles and excellent collaborations: from Guè to Marracash, passing through Elisa, Massimo Pericolo, Sfera Ebbasta, Elodie and producers Charlie Charles and Dardust.

A duet with Mahmood on the Sanremo stage in their “Chills” – which promises to be already a hit – will be Blanco, the very young singer-songwriter who in the last few months has given his own clear imprint to Italian music.

To the century Riccardo Fabbriconi, Blanco (or Blanchito, as he calls himself in his songs) was born in Calvagese della Riviera (Brescia) in 2003. A few days after the Sanremo experience, on February 10, he will turn 19.

Blanco made himself known to the public with the instruments most loved by Generation Z, to which he himself belongs, by releasing his first EP “Quarantine Paranoid“In full quarantine (2020), on the SoundCloud music platform.

Universal Music Italy is the first to notice him and offer him a record deal that will shortly lead him to his first successful collaboration. The song “Our song“In which he duets next to Psalm and to the producer Mace. The song received five platinum records.

The debut singles precede him “Pretty Woman“,”Sleepless nights” And “Flower thief“. Above all, the latter two will achieve important results in the FIMI Singles Top rank. Excellent numbers soon replicated also by the unpublished “Blinders“. The tracks are all produced by Michelangelo (producer Michele Zocca), who also collaborated with Blanco on the creation of his first album.

The very young singer would have repeatedly told anecdotes about the birth of his passion for music. Blanco admitted that he inherited it from his father who as a child loved making him listen to the songs of great songwriters such as Lucio Battisti, Lucio Dalla, but also Pino Daniele.

However, on June 18, 2021, the real hit of Blanco’s consecration on Italian radio and streaming platforms. “You drive Me crazy”Is written and interpreted with the colleague Sfera Ebbasta. Song that reaches the top of the charts in a very short time and remains there for over two consecutive months, also recording six platinum discs.

On 10 September, Blanco releases his first album “Celestial blue“, together with the first single extract of the same name. Twelve tracks produced once again by his friend and colleague Michelangelo, demonstrating the artistic partnership that unites the two.

The album “Celestial blue”Made his debut at the top of the ranking and was certified gold by the FIMI just one week after its release.

Blanco has recently announced on his official social profiles, the departure of his first tour in 2022, which bears the name of “Celestial blue tour“. Tickets that literally sold out all over Italy in less than twenty-four hours.

On December 4, 2021, Amadeus announces the participation of Mahmood and Blanco at the Sanremo 2022 Festival, with the song “Broglie”.