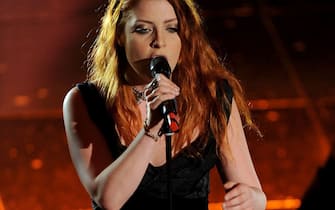 Noemi, stage name of Veronica Scopelliti, a talent discovered in the talent X Factor, made her debut in Sanremo in 2010 with the song “For all life”. He ranks fourth among the protests but the public rewards the piece with a platinum record.

WATCH THE VIDEO: 5 curiosities about Noemi

Noemi’s song written by Fabrizio Moro “Sono solo parole” is an absolute success and consecrates the Roman singer among the most brilliant talents of her generation. Noemi climbs on the podium finishing third in the standings.

In this edition, the regulation provides for the presentation of two songs and “Bagnati dal sole” is Noemi’s success of the year, a piece that speaks of rebirth, a theme dear to the singer-songwriter.

Noemi brings to the Ariston Theater a piece written, among others, by Marco Masini: “A woman’s bag”. A wonderful black and white video of the song was shot in the streets of Rome.

Noemi, from X Factor to Sanremo: everything you need to know about the singer

The song chosen for the competition of the sixty-eight edition is “Never stop looking for me” an intense and biting song, ideally the continuation of the story of the couple protagonist of “They are only words”.

For Noemi it is an important season of personal rebirth and her performances are among the most awaited. The intense and profound song “Glicine”, written by a collective of authors including Mahmood, comes sixth in the standings.

Summer 2021, the season of the return to live music, is characterized by “Makumba”, a lively piece that immediately becomes a success with a lot of catchphrase. Noemi sings with Carl Brave who is also one of the authors of the hit.

A shot from the set of the video clip of “Guardare Giù”, the single released by Noemi last November, the first after “Makumba”. The artist, who turned 40 on January 25, said she feels good about herself in this new phase of her life.

A week after Sanremo, Noemi celebrates her 40th birthday and on Instagram she writes a public letter to herself posting a snapshot of when she was a child and one of today. In the lyrics, the singer writes that her life, which has not always been simple, has also given her “unexpected happiness”.

Noemi wrote on social media that she was very excited at the idea of ​​participating for the second consecutive year in Sanremo. The singer is also expected for the cover night in which she will compete with “(You Make Me Feel) Like A Natural Woman”, the powerful song by Aretha Franklin.