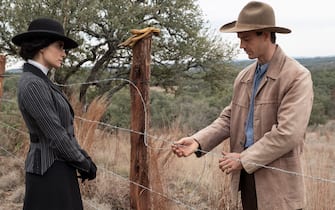 The Son – The son is the acclaimed western drama, airing on Sky Atlantic and streaming on NOW

WATCH THE VIDEO: The Son – The Son, the trailer for the second season

Pierce Brosnan stars in the lead role: Eli McCullough, unscrupulous landowner who throws himself into the oil industry

The Son – The Son, here is the trailer for the second season

The Son, from today the second season on Sky and NOW

All the news about Pierce Brosnan

The series is set in Texas, in the United States of America, between the 19th and 20th centuries

Pierce Brosnan will star in the science fiction film Youth

Comanche Native Tribe Raised And Transformed Eli McCullough Into The Man He Is Today: An unscrupulous “cattle lord” bent on becoming oil lord

Pierce Brosnan yesterday and today: how the 007 actor has changed

In this second and final season, Eli and his family must defend their possessions tooth and nail

Alongside Pierce Brosnan there is also Paola Núñez, in the role of María García, childhood friend of Pete, the son of the protagonist (played by Henry Garrett)

The Flight Attendant, the trailer for the second season

The story of Eli and his family reflects the epic of his territory, Texas, increasingly launched towards capitalism

The Flight Attendant, the cast of the TV series with Kaley Cuoco at the start on Sky Serie. PHOTO

Will Eli be able to leave the painful past behind, defend his present and forge his future?

Pierce Brosnan stars in the latest season of the acclaimed western drama, which airs on Sky Atlantic

Eli’s family was murdered by a native Comanche tribe, who raised Eli into what he is today

Alongside Pierce Brosnan we find Jacob Lofland in the role of Eli as a young man; Henry Garrett and Jess Weixler as his son Pete and his wife Sally

Eli’s mission is to leave the past behind, defending his present and building tomorrow, for him and his family.

The series The Son – The son is based on the novel of the same name by Philipp Meyer, a finalist for the Pulitzer Prize