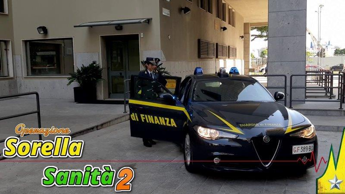 The financiers of the Provincial Command of Palermo have executed an application order of personal and real precautionary measures issued by the Gip of the Court of the capital, at the request of the local Public Prosecutor’s Office, against 10 people, of which 1 in prison, 4 hit by house arrest and 5 recipients of residence obligation and presentation to the judicial police. In addition, disqualification measures lasting one year were ordered against 3 of the recipients of the precautionary order. “The suspects, on the basis of the evidence currently collected, are indicted in various capacities of the crimes of corruption, disturbed freedom of enchantments, disturbed freedom in the process of choosing the contractor, money laundering, issuing and use of invoices for non-existent operations”, they explain the yellow flames.


With the same provision, the investigating judge ordered the seizure of over 700,000 euros as the price of the crime of corruption, as well as, against 3 companies, the ban on contracting with the public administration for one year. The investigations, conducted by the specialists of the Economic-Financial Police Unit – Palermo Public Spending Protection Group, originated from the investigative investigations carried out on the enormous amount of findings acquired during the “Sorella Sanità” operation, which, in May of 2020, led to the execution of personal precautionary measures against 13 people, 7 of whom (including two important public officials with top positions in the Sicilian health sector) already sentenced in the first degree with shortened rite to heavy prison sentences.

“The elements acquired at the state of the investigations made it possible to identify further alleged perpetrators in the criminal events already reconstructed and to hypothesize new hypotheses of corruption and disturbance relating to important tender procedures in the health sector, not included in the previous investigation, whose overall value almost 700 million euros – according to Finance – In particular, at the state of the investigations, findings have emerged concerning: the possible giving of a bribe of 700 thousand euros that the company awarded a public tender for the construction, management and maintenance of the information system of the ASP 6 of Palermo, worth 12.4 million euros, would have paid to the president of the tender commission and his fixer; to the possible giving of bribes to a public official and his fixer in the context of two tenders, for the supply of electro-medical equipment, managed respectively by the Sicili Region ana and the Palermo ASP, for a total amount of over 220 million euros “.

In this context, with the involvement of a legal consultant, purely formal equipment maintenance contracts would have been prepared by the awarded company, with the sole purpose of justifying, thanks to the use of false invoices, the transfer of sums of money which, through a compliant undertaking, they would then reach the alleged corrupt subjects. There is also the hypothesis of an attempt to disrupt a public tender procedure by, among others, a member of the police and the hypothesis of disruption of a public tender worth 227, 6 million euros announced for the award of cleaning services in the health sector, in the context of which the responsibilities of a public official of the ASP of Enna emerged, as consultant of the Sicilian Region.

And again: the possible involvement of the president of the tender commission for the assignment of the home oxygen therapy service for companies in the western basin of the Sicily region, worth 66.4 million euros, which would have revealed confidential information to the company’s executives awarded the contract, in exchange for the promise of a bribe equal to 1% of the tender amount, as well as stays in luxury hotels and the hypothesis of corruption of an official of the ASP of Enna, by two managers of an important company in the healthcare sector, in order to unduly obtain the continuation of a contract relating to respiratory home assistance for the eastern basin of the Sicilian island, for a total value of 140.7 million euros

The service activity “testifies to the constant attention and ongoing commitment of the Guardia di Finanza, as part of the investigations delegated by the Public Prosecutor’s Office of Palermo, in contrasting any form of illegality and corruption that alters the rules of healthy competition between businesses, it harms honest people and increases the costs of public services to the detriment of their efficiency “. “It should be noted that the provision in question was issued on the basis of the evidence acquired during the preliminary investigation phase, therefore, pending final judgment, the presumption of innocence exists”.