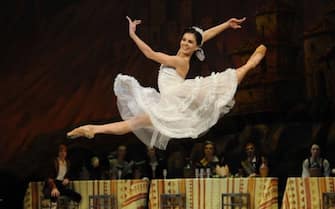 The “Dance Gala tribute to Rudolf Nureyev”, the greatest dancer of all time, will be held at the Arcimboldi Theater in Milan on Saturday 7 May at 9.00 pm. The public will be able to attend the famous pas de deux of the classical repertoire and contemporary solos performed by étoiles and first dancers from the Royal Ballet of London, American Ballet Theater, City Ballet of New York, National Ballet Theater of Ukraine and Hungarian National Ballet. Among the artists present, two stars of world dance: Natalia Osipova and Daniil Siimkin

At the Arcimboldi the Gala for Peace with Jacopo Tissi

Natalia Osipova, star of the Moscow Bolshoi and now Principal of the Royal Ballet, has been defined “the dancer of extremes” for her impeccable technique, her turns and her extreme leaps that amaze all those who see her dance. In this gala, in homage to Rudolf Nureyev, she will dance “Le Corsaire” and the duet of the second act from “Swan Lake” with Reece Clarke, First Soloist of the Royal Ballet

Nureyev, interview with the protagonist of the film The White Crow

At the gala will also dance Daniil Simkin, étoile of the American Ballet and winner of numerous awards, who has already conquered the stages all over the world with his technique made up of breathtaking virtuosity, endless pirouettes, unique jumps for the magical suspension in the air. He will stage “Le Bourgeois” and, together with Tatiana Melnik Bolotova, “Don Quixote”

Ana Sophia Scheller is prima ballerina at the National Opera of Ukraine and at the New York City Ballet. She was born in Buenos Aires, she trained at the Higher Art Institute of the Colón Theater and at the School of American Ballet. In 2003 she joined the American Ballet Theater and in 2004 the New York City Ballet, where in 2012 she was appointed principal dancer. Last December she was the main interpreter of “The Nutcracker” by Giuliano Peparini at the Teatro dell’Opera in Rome. She recently was also a guest star of the Compañía Nacional de Danza and the Teatro Massimo in Palermo

“For me it is always a pleasure to perform in Italy and it is an honor to be at a gala for Nureyev: I feel admiration and respect for him” said Natalia Osipova, one of the most loved and highly anticipated world stars at the Arcimboldi Theater Gala.