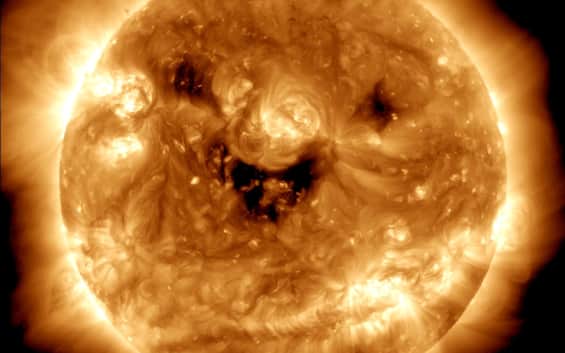 An unexpected “smile” from the Sun was immortalized by NASA’s Solar Dynamics Observatory (Sdo) space telescope. The photo was posted by the Agency on Twitter, and shows three spots recently appeared on our star which, by a happy coincidence, have taken on the appearance of two eyes and a smiling mouth. Dark spots are actually holes that periodically form in the outermost part of the Sun’s atmosphere, called the solar corona, in cooler areas where the plasma is less dense, and from where fast bursts of electrically charged particles (solar wind ) are emitted into space.

What are the coronal holes of the Sun?

The so-called coronal holes were discovered when the x-ray telescopes of the Skylab mission were sent beyond the Earth’s atmosphere to observe our star. These holes are related to the lines of the solar magnetic field: during the period of least activity of the Sun they are mainly found in the polar regions, while when the star is more active, many spots appear scattered over the entire surface.

The photo taken by the Sdo space telescope

The current solar cycle is showing unusually high activity, so much so that the peak, initially forecasted for 2025, will likely arrive a year earlier. An example of this activity are the coronal holes now photographed by the Sdo space telescope, launched in 2010 and which orbits about 36 thousand kilometers from the Earth. But there are those who have seen in the particular arrangement of the spots something more than a smiling face: according to some Twitter users, in fact, the similarity is remarkable even with one of the villains of Ghostbusters, the huge white puppet dressed as a sailor known as ‘the marshmallow commercial man’.