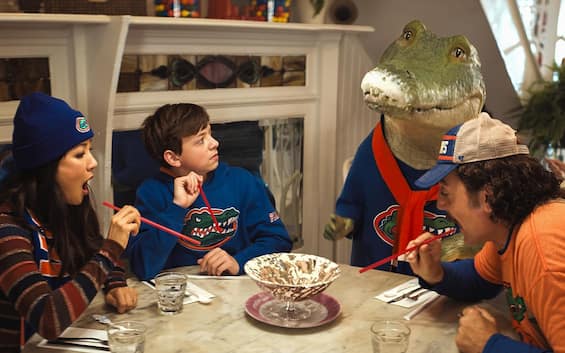 From Thursday 29 December, The talent of Mr. Crocodile arrives on Sky Primafila On Demand. From today until January 8, the title will be offered by Sky Extra for the entire CB (at €0 for all customers with active Primafila).

Presented to Alice in the City as part of the Rome Film Fest, the film is a live-action for the whole family. The direction is signed by the couple Will Speck and Josh Gordon, while the screenplay is signed by Will Davies.

The Talent of Mr. Crocodiland stars Oscar winner Javier Bardem as Hectori P. Valenti, great star of entertainment and screen. Constance Wu, Winslow Fegley, Scoot McNairy, Brett Gelman complete the cast. The work uses the original songs performed by Shawn Mendes and written by the authors of The Greatest Showman, Benj Pasek and Justin Paul. To lend the voice in Italian to the singing crocodile Lyle is Luigi Strangis, singer and songwriter, born in 2001 in Lamezia terme and winner of thethe Friends

The Talented Mr. Crocodile, the plot of the film

When the Primm family (Constance Wu, Scoot McNairy, Winslow Fegley) move to New York, young son Josh struggles to adjust to new school and new friends. Everything changes when he discovers Lyle, a singing crocodile who loves baths, caviar, great music and who lives in the attic of his new house. The two become fast friends, but when Lyle’s existence is threatened by evil neighbor Mr. Grumps (Brett Gelman), the Primms must team up with Lyle’s charismatic owner, Hector P. Valenti (Javier Bardem), to prove to the world that a family can be found in even the most unexpected situations and that there’s nothing wrong with a big singing crocodile with an even bigger personality.