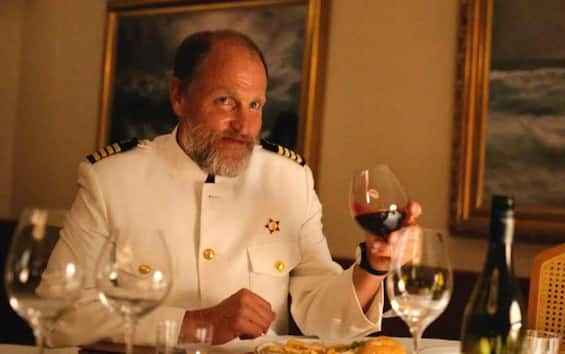 There is still a little time left for the arrival in the room of Triangle of Sadness but with official trailer released by Neon, the general public can now get a fairly consistent idea of ​​the atmosphere of the film by the Swedish Ruben Östlund who brought home the Palme d’Or at the last Cannes Film Festival.

The film, one dark comedy pointing the finger at the delusions of capitalism, will be released next fall starting from 7 Octoberdate announced in the clip.

Triangle of Sadness: the previews of the trailer

Two and a half minutes of mounted images are more than enough to raise curiosity about Triangle of Sadnessa title that already attracted attention last May, at the time of the Cannes Film Festival, and not only for the victory of La Palma.

The reviews of the film by Ruben Östlund, the first in English by the acclaimed director, already winner of the prestigious French award for The Square in 2017, they highlighted the truly unique character of the film which is a contemporary work from strongly satirical spirit.

If the movie poster, which shows the actress Sunnyi Melles vomiting gold, it seemed strong to a certain audience, the impression will be more than confirmed after watching the trailer, a crescendo of increasingly disturbing images.

The story is the tale of the dramatic and exaggerated consequences of a vacation of a very heterogeneous group of people aboard an ultra-luxurious yacht. The cruise, which began peacefully, ends up showing unexpected implications for both wealthy and snobbish guests as well as less affluent ones.

In the cast Woody Harrelson and Harris Dickinson

The trailer for Triangle of Sadness reveals some highly significant images of the spirit that permeates the shocking comedy written and directed by Östlund who for this story uses a well-assorted cast in which the award-winning Woody Harrelson and the young man Harris Dickinson who is entrusted with the role of an aspiring model who participates in the cruise only because he won it as a prize trip together with his girlfriend, in turn in search of fame as an influencer.

The film puts together a series of disturbing scenes one after another called a shock the viewer also focusing on disgust factorespecially in the middle of the film, when the yacht ends up in chaos.
Triangle of Sadness is the third film to triumph at Cannes distributed by Neon. The American independent film production and distribution company counts among its recent blockbuster titles, Parasite by Bong Joon-ho, Titanebest film at Cannes in 2021 and The Neon Demon by Refn, nominated for the Palme d’Or at Cannes in 2016.