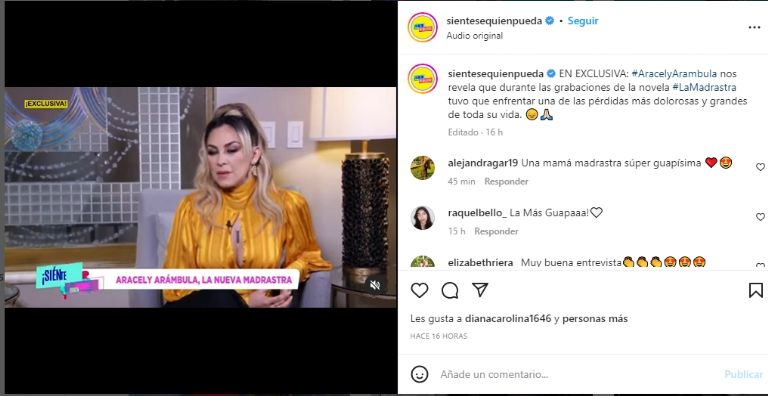 Aracely Arambula In an interview he gave to the program “Sit down who can” that is broadcast on UniMas, he spoke about personal aspects of his life. There were times when she was extremely moved to remember her deceased father while she was recording a soap opera last July. Despite the pain of her loss, she appreciates that she was always able to show him all her love.

Regarding the death of his father, Aracely He said in the interview: “In July, suddenly, in the middle of this novel, it happens that I talk to him on a video call, we talk, everything is wonderful, and the next day he left, so I have that satisfaction that I never lacked to tell him I love you, I love you.” I love, I love you and he knows it”.

The actress revealed that part of her ashes were placed in a pendant she was wearing during the interview. “Here are her ashes”, she said very excited, the ex of Luis Miguel when kissing the pendant. “I am sad because it is inevitable, the head understands it, the heart not so much. It is a very difficult process. It was a grieving process that was the hardest thing in my life and we are still processing it obviously.”

The mother of the children of Luis Miguel He referred to how the death of his father affected him at work. At the time of her death, she was recording a soap opera. “I didn’t think I could finish this project because everything hurt, my bones, my soul.”

Nevertheless, Aracely He recognized the great support he received from his colleagues. Upon arriving at the recording studio, he said that: “we held hands and hugged each other to cry, to wipe my tears and put on makeup to continue recording.”