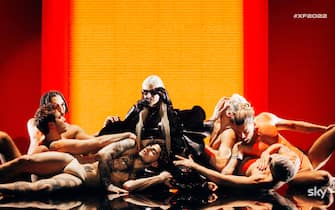 Beatrice Quinta, wrapped in a latex onesie, recounts her disappointment in love by presenting the unpublished “Se$$o”, already proposed at the Auditions, at the fourth Live of X Factor 2022.

X Factor, a fourth Live of news: unpublished songs, rankings and Cattelan on stage. The podcast

The performance of Beatrice Quinta (who Dargen D’amico defines as “a real diva”) represents a worthy start for the Live of the unreleased X Factor 2022. “You delighted us with a beautiful staging, everything was perfect”, comments Rkomi .

Tropea with their “Cringe inferno” stage a complaint against toxic and annoying love that forces you to be what you really are not. The unreleased is produced by Simon Says!.

“I’m sure Dante would have written Hell like this nowadays”, concludes a very satisfied Ambra after listening to Tropea’s “Cringe inferno”. Dargen D’Amico agrees: “The best thing you brought to the stage.” The Tropea risk elimination and find themselves in the ballot for the third time, but are saved once again.

In front of LINDA’s performance grappling with her unpublished “Flowers on balconies” the talks are zero for the jury: “This is her job, there is little to say”. Fedez, who strongly wanted the singer in his Roster, he comments: “I’m proud of you, bravo.”

X Factor 2022, It’s not that bad is the unreleased French Saints

The performance of the French Saints on the notes of “It’s not so bad” once again confirms the talent of the duo. “You entered with your unpublished and it was right that you were here at the episode of the unpublished”, admits Fedez.

X Factor, the French Saints sing I want you by Ornella Vanoni. VIDEO

Lucrezia had presented herself at the Auditions with the unreleased “MOLECOLE”, a song that immediately entered the Spotify Viral chart. The song is produced by Simon Says! and Emil Yard.

Lucrezia sings and plays the keyboard, and excites with her “MOLECOLE”. “There are all the right elements to create a song with a contemporary flavor – comments Dargen D’amico, who concludes – You are perfect for this job”. But this is not enough: Lucrezia is eliminated and she has to leave the show.

Molecole di Lucrezia, X Factor competitor, is at the top of the Spotify Viral chart

All crazy for the Omini. The unpublished “Matto” of the Fedez Roster group boasts among the authors the signature of Andrea Appino of the Zen Circus and is produced by BRAIL and Gianmarco Manilardi.

The Omini like, once again. In particular, it is Fedez who congratulates them after listening to the unreleased “Matto” for the work they are doing within the show: “I’m happy to have come this far with you and the path you have taken”

The candid Joėlle is liked by the jury and for the first time, singing her unpublished work, she demonstrates a certain stage presence. Dargen D’amico points out that the young artist has “a pure energy that is not often noticed”.

Disco Club Paradiso give a kick of energy with “DCP”. The unpublished one, produced by Big Fish, is the same one with which they stood out at the Auditions.

Whether they like it or not, Disco Club Paradiso have one certainty: they know how to entertain. “Your caciara pop, these days, is the solution”, comments Ambra, amused by the unpublished “DCP”. “Good and engaging”, these guys show that they have “something interesting”, say the judges.

TrisFactor, the X Factor fantasy to play with competitors at Live