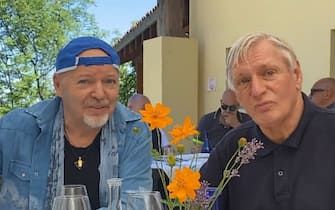 Vasco Rossi inflamed the audience of the Stadio Olimpico Grande Torino present at the last date of the summer 2022 tour which saw the rock star return to the stage after a long period of absence. Before the Vasco concert met Don Ciotti with whom he discussed peace. A clip of their meeting was posted on the artist’s official Instagram profile, which has nearly two million followers

Vasco Rossi and Don Ciotti spread their no to war together from the stage. The message arrived loud and clear to the audience who welcomed the arrival on the scene of the rock star’s special guest with great applause.

Vasco Rossi greeted Don Luigi Ciotti introducing him as an “exceptional person”. The 76-year-old founder of Libera asked those present to fight, all together, for peace and truth

Don Ciotti also made an appeal for everyone’s commitment to defeat the arms industry and finally left the stage to Vasco Rossi with whom he has shared a splendid friendship for many years.

Fun but also civil commitment, therefore, on the last date of the VASCO LIVE Tour 2022, which ends after a series of triumphal concerts, many of which sold out, and which saw Blasco protagonist of the major arenas of the Belpaese in the months of May and June

Also in Turin Vasco Rossi offered his fans a show in which his greatest successes found their place. As on other dates of this tour, the opening was entrusted to XI Commandmenta song that helps to warm the crowd

Toffee, Sally, Reckless life And Clear dawnclassics from Vasco’s repertoire, were performed to close the concert

Vasco Rossi, in a note, said that the word of the year is “Finally”: finally music is back in the stadiums, finally some joy in a world full of problems

Vasco Rossi never stopped during the tour thanking the fans who constantly supported him in this umpteenth journey, underlining the expectation of those who bought tickets several seasons ago, before stopping the big live shows due to the pandemic.