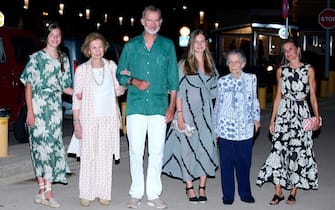 With official commitments reduced to a minimum, the Spanish royal family is enjoying moments of relaxation and carefree evenings in the Balearics. With King Felipe, his wife and two daughters Sofia and Leonor, there are also the beloved Queen Emeritus Sofia and her sister Irene of Greece, three years younger than Juan Carlos’s wife. A reunion readily captured by photographers

The women of the House are the ones who attract the most attention of their subjects and their admirers all over the world who, in recent weeks, are particularly appreciating Letizia Ortiz’s casual-chic looks. For an evening among women, also in Palma de Mallorca, with Sofia, her two daughters and without Prince Felipe, the queen wore a short patterned dress from the low cost brand Zara. For the occasion, mother-in-law and daughter-in-law are in harmony, not just chromatic

Tatiana Blatnik, princess of Greece and Denmark, has published on her Instagram profile a photo album of her traveling holidays in Italy, spent between cities and renowned seaside resorts. Travel companion of the wife of Nicholas of Greece, her mother, Marie Blanche Bierlein called her best friend

Royal Princess Anne appeared smiling and very comfortable at the charity Cowes Week regatta on the Isle of Wight. Beside her, with a white-trimmed hair, her second husband, Admiral Timothy Laurence

Edward, Earl of Wessex and last son of Elizabeth II, closed the Commonwealth Games in Birmingham, a sporting event of great appeal in the United Kingdom of which he is patron and which saw many crowned heads participate as spectators, from the Prince of Wales and his wife to Prince William with Kate Middleton and little Charlotte. The next edition will be held in Australia in 2026

Edoardo Mapelli-Mozzi, husband of Beatrice of York, posted a very sweet birthday dedication to his wife who turned 34 on 8 August. In support of the spontaneous photo of the princess, the entrepreneur wrote that his wife is the best partner and mother in the world

Even Princess Eugenie made her social wishes to her older sister with a post full of more or less known archive photos. For the British press, the two sisters would no longer be united as the first species because Beatrice, according to some, would aspire to a more prestigious role in the royal house, which would explain the increasingly frequent appearances of her in public with her husband Edoardo

The news reported by the Daily Express that Kate Middleton had asked to send a formal response to a letter sent by a child to the palace in which the young subject invited Prince George to his birthday made the rounds of the sector media. For the Duchess of Cambridge, the tender gesture deserved a written reply, already jealously guarded by the child’s mother

Another tour in the center, another outfit for Letizia Ortiz and the Infante Leonor and Sofia, the most photographed in Palma de Mallorca. For the afternoon walk, the sovereign does not give up on espadrilles for her look consisting of shorts and shirt, a low cost outfit except for shoes, Boss, and sunglasses, Carolina Herrera. Wedge espadrilles, on the other hand, for the two girls, perfect for their light minidresses

According to royal expert Richard Palmer, Prince Harry does not always seem happy with Meghan Markle and he is not alone in believing that the Duke of Sussex could return to the UK in anticipation of a new role that could be entrusted to him when Charles ascends the throne.

Still on the subject of the children of Carlo and Diana, the research carried out by the production of The Crown of the performers of the two princes for season six of the Netflix show, which starts shooting in September. Robert Sterne, casting director, asked for two young men to put the faces of teenage princes. Candidates may also be inexperienced as long as they have a strong resemblance to the characters

Prince Achilles of Greece and Denmark, the third son of Crown Prince of Greece Pavlos and Marie-Chantal Miller, is celebrated in the special sector on August 12 for his reputation as a heartthrob. The young man, who grew up in the States in contact with the stars of the entertainment world, has already gained experience as a model and actor and has almost five hundred thousand followers on Instagram