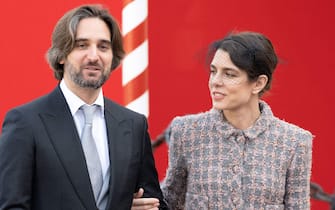 The week of the royal families of Europe opened with the news, first released by Voici and Hello!, of Charlotte Casiraghi’s third pregnancy while expecting her second child with her current husband Dimitri Rassam. Although no confirmations or denials have arrived from the Principality, the French weekly added that the news would not have been well received by Caroline of Monaco due to the complicated relationship between the princess and her daughter

Charlotte Casiraghi is pregnant with her third child

The Danish royal house wished a happy birthday to twins Vincent and Josephine of Denmark, the youngest children of the future King Frederick and Mary Donaldson who turned twelve on January 8. For the occasion, two recent portraits of the brothers, entitled Royal Highnesses, have appeared on the official social pages, taken by photographer Jens Rosenfeldt

Princess Anne’s daughter Zara Tindall traveled to Australia on 8 January to participate in the annual Magic Millions Polo equestrian event on the Gold Coast. Here she is with an interesting summer look posing with her husband Mike. The lightweight dress, with a belt at the waist, front buttons and balloon sleeves, by Australian designer Rebecca Vallance, was highly praised by the commentators of the royal looks

Zara Tindall has a long association with Magic Millions Polo & Showjumping and, during her stay in Australia, she attended several events. The shots that portray her in the saddle on the Gold Coast beaches frequented by sportsmen, high society and celebrities for the event are truly evocative. The British couple haven’t, however, abandoned their sporty style and have been spotted out and about in polo gear

On January 9, Kate Middleton turned forty-one, a birthday celebrated privately, in the family. In the absence of new social photos of Kensington Palace, the best wishes for the Princess of Wales came from the official page of the Royal Family who, on Twitter and on Instagram, via Stories, posted a shot from last September in which William’s wife , visiting Wales, is in the company of a little admirer

At the stroke of midnight on January 10, Spare, the long-awaited biographical book of Harry of England, arrived on the shelves and in the online stores. The volume was released, in some UK bookshops, with a 50% discount on the cover price and, on its first day alone, recorded record sales for a title in the non-fiction category. Published in sixteen languages ​​and destined to have a very wide circulation, the memoir reveals many unpublished details of the life of King Charles’ second son and is destined to leave a significant cultural impact

From cocaine to a fight with his brother William: the shocking revelations of Harry’s book

The Duke of Sussex (who gave two very popular television interviews on the eve of the release of Shootwith Anderson Cooper of CBS and with Tom Bradby of ITV), engaged in the promotional tour of the volume, also appeared at the Late Show by Stephen Colbert where he commented on the interpretations of the press of some passages of his writing. The publication of the memoir monopolized the news of the sector media and not only for the entire week, a media coverage that does not tend to diminish as the days go by

Married since 1964 to Anne-Marie of Denmark, sister of the current sovereign of the country, Constantine II was related to many European royals, starting, of course, with Philip of Edinburgh (born Philip of Greece and Denmark), his first cousin. Beloved by the British royals, he had been chosen as one of Prince William’s godparents

Constantine II, the last king of Greece, has died at the age of 82

Married since 1964 to Anne-Marie of Denmark, sister of the current sovereign of the country, Constantine II was related to many European royals, starting, of course, with Philip of Edinburgh (born Philip of Greece and Denmark), his first cousin. Beloved by the British royals, he had been chosen as one of Prince William’s godparents

The last farewell to Constantine II is scheduled for Monday 16 January at the Metropolitan Cathedral of Athens. It will not be a matter of state funerals (also because Constantine had a Danish passport since 1983) but the presence of crowned heads and prominent personalities from other countries cannot be excluded. The ceremony will be followed by burial in the Tatoi cemetery

Prince Harry, the eight most shocking episodes of the Spare book

Letizia of Spain is already in full swing at the beginning of the year which has seen her involved in various engagements in Madrid, including an event for the tenth Project Promociona (left) and the celebration of Military Easter (last photo on the right ). On both occasions, the sovereign showed her latest favorite jewel: a Made in Italy ring from the Coreterno brand which bears Dante’s verses: “Amor che tutto move”. Inside the jewel, simple and sophisticated, however, ancient English verses: “As Long I’m Existing You Will Be Loved”

Letizia Ortiz, the Queen of Spain: who is King Felipe’s wife. PHOTOSTORY

Queen Letizia traveled to the Balearic Islands with King Felipe for a series of official events. Here they are together in Menorca, at the port of Mahón. She always drives crazy the casual chic style of the sovereign adopted on these occasions

A week full of public events also for Mary Donaldson, Crown Princess of Denmark who (right) has inaugurated a new center for visitors and cancer patients, a commitment that sees her involved as patroness of the Danish Cancer Society. On the left, however, the princess was engaged in the ceremony for the distribution of research grants to the Heart Association And Children’s Heart Foundation. Both events were held in Copenhagen

First public outing of 2023 for William and Kate of England who visited the new Royal Liverpool University Hospital which replaced the old structure and reopened in October 2022. The Princes of Wales were greeted by a huge crowd

King Charles III, on a visit to Aberdeenshire, stayed for a long time in the structures that deal with the needs of the local community which, in some remote areas of the region, is struggling against the problems of isolation. For the monarch, this is the first public release since the distribution of Shoot

The week of the royal families, from the release of Spare to the death of Constantine II. PHOTO