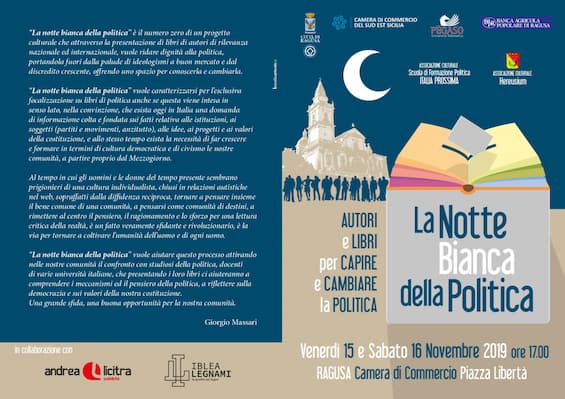 On 7, 8 and 9 October a series of meetings with authors, political scientists, journalists ready to open a reflection by drawing ideas from their latest books

A political observatory is born in Ragusa, a window on the panorama of our country, of Europe but also of the whole West, perhaps called to its most demanding test from the Second World War to today. An appointment conceived and curated by the Italia Prossima School of Political Education with the collaboration of the University of Catania, Calabria and Palermo.

This year will be the third edition dedicated to the new challenges of Italy after the vote of 25 September, its position in the international chessboard with the government to come, the European cohesion threatened by the conflict in Ukraine which also reverberates on the three US superpowers , Russia and China. “We cannot fail to ignore that the quality of democracy depends on the quality of citizens’ awareness – explains Giorgio Massari, promoter of the event – The more citizens are informed, the more they will be able to make useful choices for all. A utopia? Maybe, but we think it’s a necessary job to do, an important service to our community to foster change. And our event aims to reflect precisely on this “.

The three days of Ragusa on politics will be opened by a lectio magistralis, by the journalist and invites Rai, Lucia Goracci who will talk about women and democracy in these war scenarios.
The second day will be attended by the political scientist Gianfranco Pasquino, the writer Vittorio Emanuele Parsi and the speakers Mara Morini and Francesco Raniolo. Each of them will present the latest book of him.
The third day will be closed by the publisher Carmine Donzelli, the economist Domenico Cersosimo and the head of international relations of Limes Fabrizio Maronta.