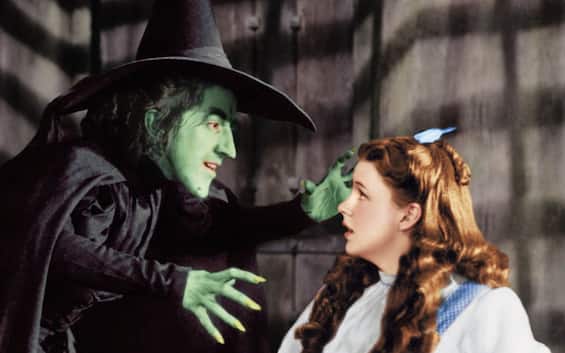 Difficult to find a better object than an hourglass to understand (literally) the value of time. The one used more than 83 years ago for one of the most iconic scenes of The Wizard of Oz it has nothing that can judge an exorbitant evaluation in itself: it is a handcrafted object, built with common materials such as wood and papier-mâché. Not even its dimensions have anything special, being in all respects similar to those of thousands of other similar objects produced on an industrial level in the world. Yet the hourglass de The Wizard of Oz it ended up being bought for almost half a million dollars a few days ago, and the reason must be sought in what the artifact was born to measure (at least in theory): time. Since it was first seen on screen in 1939, the expensive purchase has entered the collective imagination, gaining more and more economic value every day. A fate common to many memorabilia from the history of cinema, even those sold together with this expensive relic of the golden years of Hollywood.

Buy yourself a piece of cinema

During the last auction promoted by theHeritage Auctionss there was a little bit of everything for sale. As always in these cases it was not a question of mere props for the wealthy interested parties, but rather of authentic “pieces of a dream” to take home at almost any cost. We can only imagine the thrill of the Willy Wonka golden ticket buyer, who must have felt as lucky for a moment as the Charlie Bucket from The Chocolate Factoryor the joy of the one who has become the rightful owner of the tunic worn by Charlton Heston neither Ten Commandments. However, no heirloom has been able to match the hourglass de The Wizard of Oz. Perhaps exaggerating, Heritage had touted the showpiece of its catalog as “the most recognizable authenticated prop of the The Wizard of Oz”, in defiance of Dorothy’s iconic red shoes (actually sold at an even higher price). Though it’s hard to come up with an actual ranking of what sticks most in mind about the film Victor Fleming, however, it must be recognized that that timepiece created by the professionals of MGM actually appears in one of the key scenes of the film. Never mind if its red sequin content was only inserted later and prevents the hourglass from actually working. Patience that the latter is basically made of papier-mâché, wood and glass, not even if it were a Art Attack ante-litteram. What convinced the mysterious fan to invest heavily is the charm of that object, brandished by the Witch of the West in one of the most iconic scenes of the film.

A purchase that is also an investment

The hourglass with its little gargoyles adorning it will always remain linked to the world of Oz, pace of those who have remembered it over the years as well in other films such as The Broadway Boys (1941) , Diana the courtesan (1956) or The seven faces of Dr. Lao (1964). The object is considered a “piece” of Oz even more than other memorabilia auctioned with it, even more than those who opened and closed their on-screen history with that cinema classic. Neither a trial version of Dorothy’s gingham apron (purchased for $125,000) nor a jacket worn by an Emerald City extra (purchased for $37,500) came close to the hourglass’ exorbitant price, which came in at $495,000. An out-of-this-world price which, however, can also be seen as a possible investment: after having closed its cinematographic “career” and having been exhibited in various museums, the artefact has in fact already been the protagonist of two auctions. Every time the hourglass that belonged to the Witch of the West in the film has changed hands, changing owners, it has done so by increasing its price, arriving today at almost half a million paid. In short, it is potentially a good buying and selling business which, however, is not always possible to replicate. To stay with the props of the iconic film starring a very young girl Judy Garland, a few weeks ago a judge blocked the sale of a blue and white checked dress and blouse worn by Dorothy’s interpreter. The dress was believed lost forever after being lost for more than forty years but the lucky discovery, in a shoe box thrown away, had brought to light the treasure. A new one-of-a-kind item was ready to go up for auction, at least until the closest heir to the last rightful owner claimed possession of the dress. While waiting to resolve the dispute, District Judge Paul Gardephe has nipped any possibility of a sale in the bud. However, it is difficult to say whether the dress could rival the cost in the future with the hourglass, which also had a great symbolic meaning on its side. With it, the Witch of the West reminded Dorothy how little time she had to chase after her dreams. A memorandum that we hope will also keep the latest buyer of this magical fragment of the world of Oz in mind.