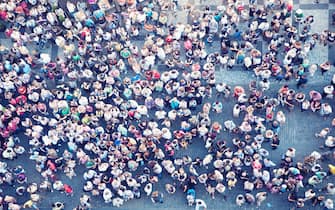 There world population has reached 8 billion to be human. This was certified by the United Nations Department of Economic and Social Affairs, according to which November 15th is the date on which the milestone is exceeded

WATCH THE VIDEO: COP27, UN: we are on a highway to hell

In the data released by the United Nations on world population trends, it is underlined that the current growth rate is the lowest since 1950: in 2020 it was, in fact, less than 1%. The latest projections speak of one growth to 8.5 billion people in 2030

The population is then expected to reach about 9.7 billion around 2050, before meet a peak close to 10.4 billion humans in the decade of the 1980s and remain at that level until the end of the century

The data available on the United Nations website also show how the fight against infant mortality has achieved notable successes in recent decades: if in 1950 220 of every 1,000 children born died before the age of five, in 2025 there will be fewer than 40 of every thousand to drop below 20 by the end of the century

Also life expectancy data have recorded substantial improvements: if in 1950 the age of 47 was not reached, before the Covid-19 pandemic the figure was close to 73 years old. Despite the temporary trend reversal visible in the graph, estimates speak of a life expectancy of around 82 by the end of the century

Interestingly, in this case, the persistent data discrepancy between men and women: from 1950 to today (and according to forecasts at least until the end of the current century), the former have a significantly higher life expectancy than the latter

Furthermore, the UN data shows how the fertility rate has been steadily declining for decades: if in the 1950s the figure was around 5 births per woman, in 1975 it fell below 4. Currently less than 2.5 children are born for every woman, and the figure is destined to fall below 2 by the end of end of the century

Reaching the goal of 8 billion humans on Earth “is aoccasion to celebrate our diversities in recognition of being a single humanity”, said UN Secretary-General António Guterres on this year’s World Population Day. “Let us marvel at the developments in medicine, which have increased life expectancy and sharply reduced infant mortality”

The UN secretary general had added: “Together with the celebrations, it is necessary remember that it is our responsibility to take care of our planet and reflect on what we can still improve in our commitment to others”

Covid, UN: “It has brought the world back 5 years”