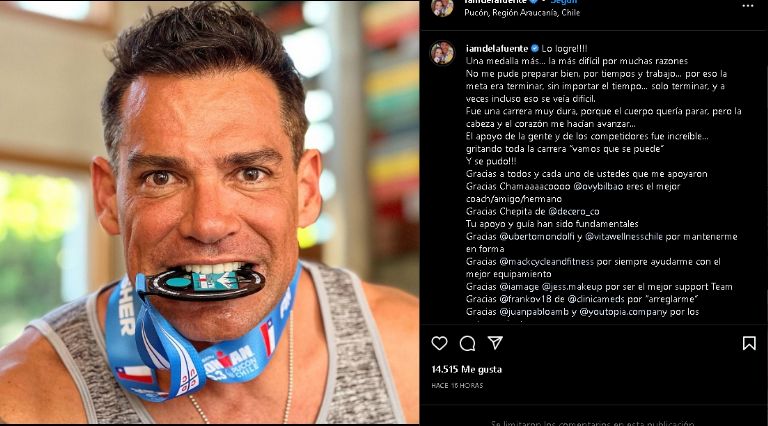 The actor Cristian de la Fuente He participated in the IronMan of Pucón that took place on Sunday, January 8 and, as expected, he got a medal after overcoming the hard tests of the event. However, it was not the sporting feat that made the headlines this Monday, but the message that he posted on his Instagram account and that gives the impression of a reconciliation with his wife. angelica castro.

After having gone through difficult times at the family level as a result of some images that appeared in 2022 where he is seen with another woman, the 48-year-old actor shone in the sports competition and was always accompanied by his daughter Laura. And also after getting the medal, she wrote a heartfelt and happy caption on the photo that she shared on Instagram that starts off saying “One more medal… the most difficult for many reasons.”

Then the actor adds that “I couldn’t prepare myself well, due to times and work… that’s why the goal was to finish, regardless of the weather… just finish, and sometimes even that seemed difficult.”

He also details “It was a very tough race, because my body wanted to stop, but my head and heart made me move forward…
The support of the people and of the competitors was incredible… shouting throughout the race ‘let’s go, we can’ And we could!!!”.

Then De la Fuente takes the time to thank all those who supported him in this sporting feat and, of course, what most attracted attention was that he mentioned the most famous couple at times when it is presumed that there is more distance between them than closeness. . In this regard, he wrote “But above all, thank you @laudelafuentec and Angélica because you were the energy in my head to continue when I couldn’t take it anymore…”.