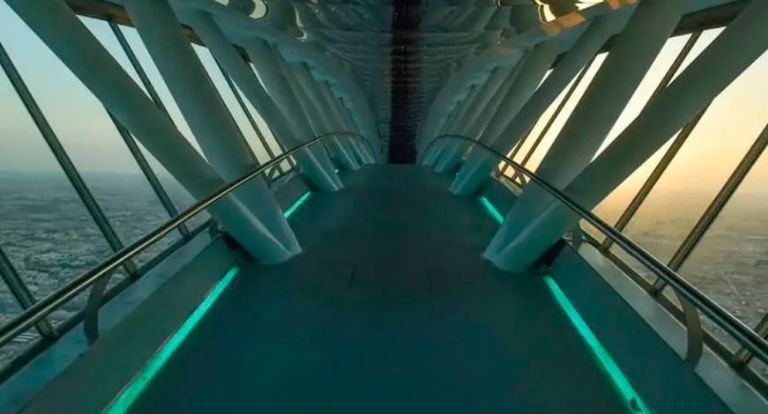 Cristiano Ronaldo he had run out of club. After his departure from Manchester United, the Portuguese had no contract, there was no big club that bet on him. After going through those difficult moments in his career, Cristiano was presented a few days ago at Al-Nassr in Saudi Arabia.

Of course, Georgina Rodriguez and the children followed him there, and the Al-Nassr leadership placed him and his family in the Kingdom Tower as they search for a house in Riyahd that meets the expectations of luxury the family seeks. The Kingdom Tower is one of the tallest, most expensive and most luxurious buildings in the country.

The English media Daily Mail, told the details of this temporary home of Christian and Georgina. In the tower is a Four Seasons headquarters, not only have Ronaldo been given one of the best suites, but there are a total of 17 rooms occupied by friends, family and staff of the player. The price cannot be known exactly since they only offer it to people who make reservations in private.

It is estimated that Cristiano Ronaldo you will pay around 80 thousand euros when you leave once you have found a permanent home for your partner, Georgina Rodriguez, and their five children. Meanwhile, the family enjoys the luxury of the hotel, its incredible views and amenities.

The official site of the Kingdom Tower specifies all the services: “Greet your guests with incomparable views of Riyahd. Our newest two-story suite occupies the 48th, 49th and 50th floors of the hotel and features a great room, a private office, a dining room and a multimedia cinema”. In addition, it adds more rooms from the Portuguese’s new home, such as “a second elegant dining room, a pantry, a living room and an executive study. In terms of gastronomy, it reveals: “the best of dishes from China, Japan, India and the Middle East, with the freshest à la carte ingredients”.