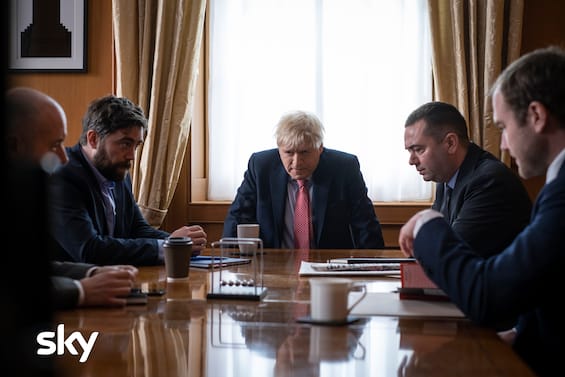 A sudden rise, a sudden and inexorable fall. This England, the Sky Original TV series available exclusively on Sky and streaming only on NOW in binge watching starting September 30, is a daring operation. Telling Boris Johnson’s advent in Downing Street and the origin of his decline, delving into the lies of his government and exposing individual and collective responsibilities in the failed management of the Covid-19 pandemic.

Between fiction and reality

Written (together with Kieron Quirke) and directed by Michael Winterbottom, the series comprises 6 episodes and just under 6 hours a time span of about 10 months. Winterbottom begins his story by alternating the repertoire images with the performed scenes, then the first fade away, leaving room for the second, but This England it remains a fiction in the middle, with a very strong link with facts that are too close, in time and in the personal experience of any spectator.

A skilful editing alternates the events of the government and the scientific committees that manage the crisis with the more concrete impact of the pandemic on people’s lives, in a constant ping pong between the deaf cynicism of a cabinet more focused on focus groups and satisfaction ratings that on the health emergency and the pain of families forced to say goodbye to their loved ones through a video call on Facetime, two parallel lines destined to cross when the premier himself gets sick and ends up in intensive care. The result is a strong emotional impact, with alternating and mixing feelings of anger and compassion.

But This England it is above all the portrait of a man far from the rough caricature we are accustomed to, of a former journalist of great culture, able to speak fluent Latin and Greek quoting the classics, a lover of Shakespeare, Homer, Cicero and Thucydides, obsessed with Caesar , from the Roman Empire and from the idea of ​​power. A man who makes a lot of mistakes but is certainly not incapable of outbursts of humanity.

Kenneth Branagh is extraordinary in his portrayal of Boris Johnson. He doesn’t recite it, he becomes it. In the facial expressions, in the tone of voice, in the tics, in that anxious stammering of moments of difficulty. But the real masterpiece is accomplished in the representation of the most intimate moments, of the difficult relationship with the older children, of the feeling of love that unites him to his partner Carrie Symonds (Ophelia Lovibond). A different, kind, lovable and caring Johnson, in one word: human.

NOT THE ONLY GUILTY

So we are surprised to see that he is not the villain of the series. BoJo is wrong e This England does not give him discounts. And it could not be otherwise: he is the head of a government that hesitates for a long time and acts late, ending up constantly chasing a ball that goes down faster and faster on an inclined plane. He himself closes his eyes to the disaster that is unfolding by chasing the chimera of herd immunity, a decision that will cost tens of thousands of lives, but he is certainly not the most negative character.

Around him, in fact, swims a herd of sharks, of up-and-coming and unsuitable ministers, led by Senior Councilor Dominic Cummings (Simon Paisley Day), eminence gray of his campaigns, his Agrippa, the genius of the Brexit lamp. The man who after having accepted the lockdown outright will violate it thinking he can go unpunished. And whose Ides of March will anticipate those of the premier by just under two years.