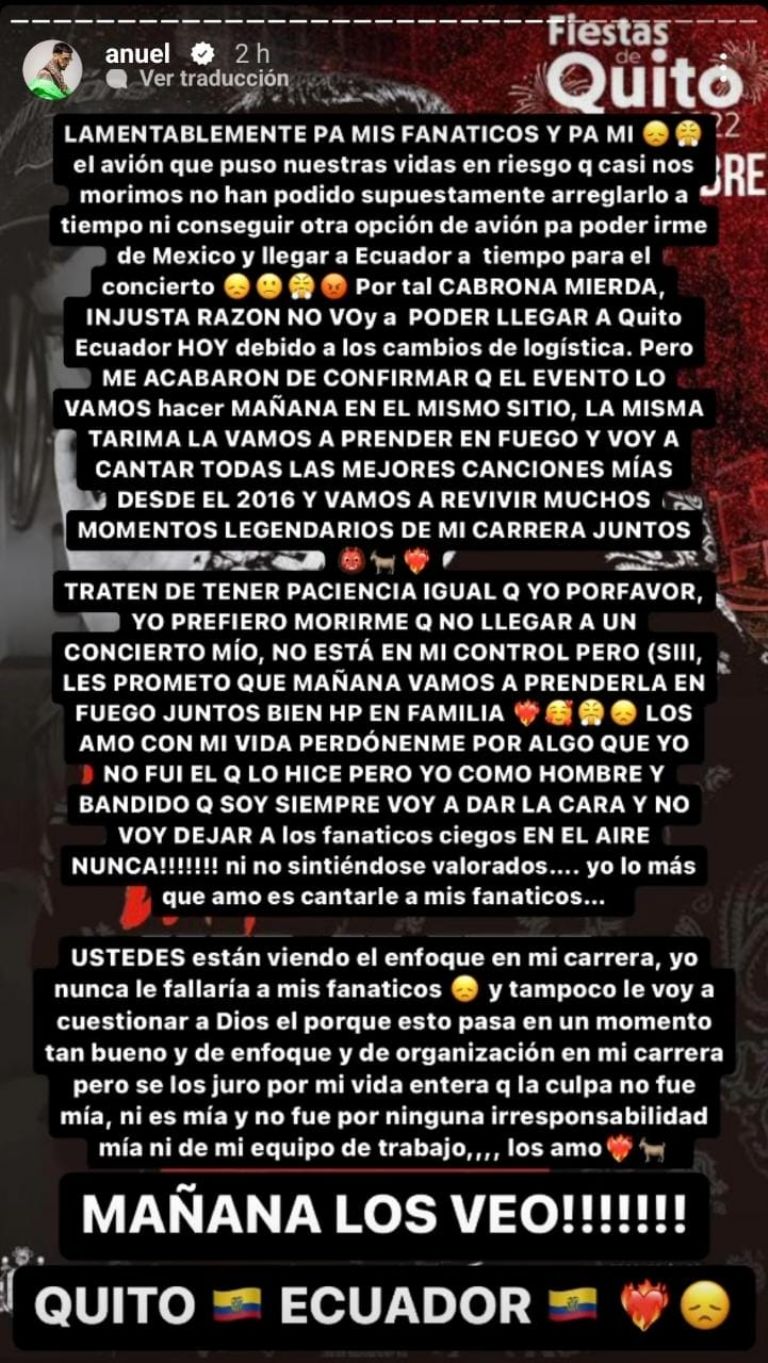 Problems continued anuel aaafter he traveled to Mexico and had to go through a forced landing due to weather conditions with his pregnant wife Yailin The Most Viral, now he did not have the chance to get to his concert in Quito.

Puerto Rican rapper anuel aa He had planned to appear on Monday, December 5 at the Bicentennial Park, located north of Quito. There he would give a free concert at 7:00 p.m. The Anuel AA show had been organized as part of the schedule of events by the 488 of the Ecuadorian capital’s foundation. However, the former Carol G. He did not show up for the show and caused a logical disgust and discontent among the fans and the public that was there waiting for the show.

A few minutes ago the municipality decided for “security reasons” to suspend the concert of reggaeton Anuel in Bicentennial Park, where thousands of people came out indignant.
It’s chaos is notable right now outdoors. pic.twitter.com/kEUN8jpvNl

However, the reasons they gave were again problems with the flight. Through a statement, the Quito Ministry of Culture explained that anuel aa could not appear due to a technical problem of the flight in which he was traveling to the city from Mexico. Clearly the problem was unrelated to the organization of the festival because before Anuel AA the artists Smooth Music Xperience, Jhonatan Luna and Tercer Mundo came on stage, and everything worked perfectly.

#RELEASE | We inform the public. pic.twitter.com/ibtBy0i3I4

The Secretariat confirmed the rescheduling of the show and assured that the rapper anuel aa Yes, he will give his show on Tuesday, in the same Bicentennial Park, where other artists are scheduled, such as the Colombian singer Fanny Lu together with the Ecuadorian group Verde 70 and the soloist Marqués.

for his part anuel aa He posted a lengthy explanation on his Instagram stories and apologized:

UNFORTUNATELY FOR MY FANS AND FOR ME, the plane that put our lives at risk because we almost died supposedly could not fix it in time or get another plane option so I could leave Mexico and get to Ecuador in time for the concert.