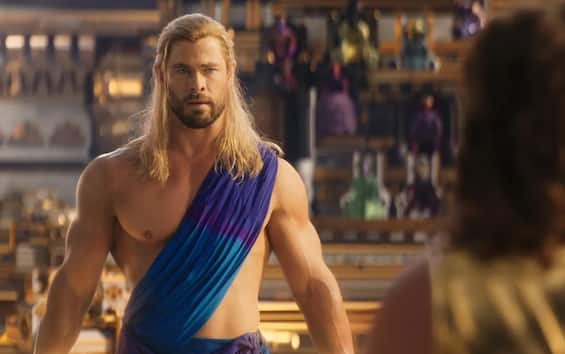 Director Taika Waititi revealed to BBC Radio 1’s Ali Plumb that he originally thought of a Jesus Christ cameo for his film. Thor: Love and Thunder.

Fourth chapter of the God of Thunder saga, the film has been out for two months now but continues to record a huge success, thanks also to the protagonists, the beloved Chris Hemsworth and Tessa Thompson (respectively God of Thunder and Valkyrie), who are also joined from a cast that defining a chapeau would be an understatement.

We remind you that the film is now available on Disney + (also visible on Sky Q and through the app on Now Smart Stick).

Since it has now been over eight weeks since the release of the film, the time has finally come to offer fans some succulent gem, like this one … Waititi wanted to reveal some background regarding the production, giving a good shake to all of us thanks to the cameo of Jesus.

This is not so much the scene of Omnipotence City, in which not even one of the gods of the Universe is missing: the director wanted to insert the presence of the son of God, understood as the God of Christianity, in a scene linked to the character of Valkyrie . Below we present the words of Taika Waititi, to dispel any doubts.

The words of Taika Waititi

There was a question from the interviewer – Ali Plumb’s BBC Radio 1 – relating to those who had not been included in the Pantheon scene and already there Waititi anticipated a little something.
But the director and screenwriter of the Marvel cinecomix – now known for being one of the most “crazy” filmmakers (pass the expression) in Hollywood – then clearly stated the following: “In a scene with Valkyrie, the character of Tessa Thompson, you basically mentioned a certain ‘god of woodworking’. Then, a cut would show us you know who … I mean, the big G. ”

The big G would stand for Jesus Christ (in the original Waititi he speaks of big J, because in English J is Jesus) who seems to have been a carpenter before becoming a preacher. As his father. On the contrary: stepfather, let’s say …

During the interview, Taika Waititi kept quiet about the reasons why the Jesus scene was excluded from the film. The director and screenwriter of the film did not even say if that sequence was shot or if it did not even get to the clapperboard. In the first case, it would therefore be a part of the shot that was excluded then during the editing phase (which would make that cut very succulent, but Waititi declared that he was not interested in any Director’s Cut, he even said he was against this practice) however it is probable that the scene in question was never even realized. And the reasons seem quite self-evident: okay that Waititi is now given carte blanche and therefore could really do anything and everything, however bothering Jesus Christ for his film would be a bit too much. It is therefore likely that, after proposing the scene, his collaborators persuaded Waititi not to proceed.

“I’m surprised the God of Ravioli has been approved,” Waititi said. “And you will be surprised to know that I thought about it during a lunch and… guess what I was eating?”, The director jokes with his usual do. “And Tessa Thompson, that is Valkyrie, mentions the God of Carpentry and also there had to be a shot on you-know-who… the big G”, here are Waititi’s certainly not cryptic words.

The cast of Thor: Love and Thunder

In addition to the aforementioned Chris Hemsworth and Tessa Thompson (respectively as the God of Thunder and Valkyrie) the cast boasts many other stellar names.
There are Christian Bale (who plays the villain Gorr, aka The Slaughterer of Gods), Russel Crowe who plays the part of Zeus and Matt Damon who reprized his role in the previous film, namely Loki.

In the previous chapter of the Marvel cinematic epic, Damon made a cameo as a fake Loki at a play in Asgard. Also present are the Guardians of the Galaxy, the group of heroes who are traveling together with the God of Thunder. Finally – but last but not least, of course – there is Natalie Portman, who here plays the part of Jane Foster.