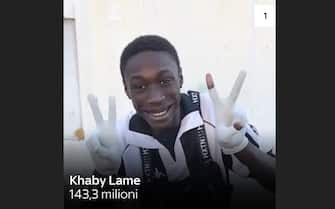 With 143.3 million followers (the number is constantly growing) Khaby Lame has become the most followed tiktoker in the world. The 22-year-old, Senegalese by birth but in Italy since he was one, has also surpassed Charli D’Amelio, an American dancer and creator. Khaby’s luck began in 2020, at the height of the pandemic. He had been fired from the factory where he worked in Chivasso. With his videos of a few seconds, simple and original, he managed to conquer a much larger audience than he himself would have expected.

Khaby Lame is the new king of TikTok: with 142.4 million followers he also surpasses Charli D’Amelio

Charli D’Amelio is the American dancer and creator who has long held the distinction of queen of TikTok. Charli, born in 2004, has 142.4 million followers

Johnny Depp lands on TikTok. In a video he thanks the fans: “We will all go on together”

Beautiful Poarch is a Filipino-American singer. With his 90.2 million followers occupies the third place of the podium in the ranking of the most followed profiles of TikTok

Addison Rae, 22, is a social media personality as well as an American actress, dancer and singer. With his 88 million followers occupies the fourth position of the TikTok ranking

Even the American actor Will Smith has landed on TikTok and boasts 72.3 million followers. The actor starred in a tense moment at the Oscars ceremony last March: as presenter Chris Rock played with unpleasant jokes towards Smith’s wife Jada, the actor lost control and is took the stage hitting Rock with a fist. The gesture cost the actor the revocation of the Oscar

Zach King (born in Los Angeles on February 4, 1990) is an American director and illusionist. With his 68.8 million followers ranks sixth in the ranking

Samantha Cristoforetti returns to Space, will be the first TikToker astronaut

Kimberly Loaiza is a Mexican influencer and singer. Born in 1997, with its 64.3 million followers it is the seventh most followed account in the world on TikTok

The eighth most followed profile on TikTok is that of the same social network. Updates and information content are shared on this account. Performed by 63.4 million users

Burak Özdemir is the most famous chef on the web. Everyone knows him as CZN Burak and he is a Turkish cook. With his 59.5 million followers is the ninth most followed account on TikTok

Dixie D’Amelio occupies the last place of this top 10. The American singer and influencer is followed by 57.4 million users and she is the older sister of Charli, the most famous personality on the social network