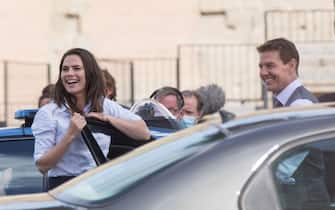 According to some insiders, Tom Cruise And Hayley Atwell they broke up. The separation between the two, in a couple for about two years, would have happened recently

Tom Cruise and Hayley Atwell have been set mates for a few seasons. The Hollywood star and the 40-year-old actress, known for the character of Peggy Carter in the Marvel Cinematic Universe, are both involved in the making of Mission: Impossible – Dead ReckoningPart One and Two, also known as Mission: Impossible chapters 7 and 8

Mission: Impossible Dead Reckoning – Part One: the trailer for the film with Tom Cruise

The same people talking about the breakup today admitted that the couple’s sentiment was genuine, despite what was said about the two pretending to be in a relationship for the media.

Insiders confirmed that between Tom Cruise and Hayley Atwell there was excellent chemistry, an element that would have weighed heavily in the processing of the new titles of the well-known action saga that will arrive in cinemas between 2023 and 2024.

The two actors would have bonded very closely during the making of Mission: Impossible which, held in Europe during the Covid season, required a very restricted environment for the cast members. Filming took place in Norway, Great Britain and also in Italy, in Rome

Personal differences would have led the two actors to separation. The source reports that the two will continue to work together as good friends

Top Gun: Maverick, the review of the film with Tom Cruise

The industry media had assumed the relationship between Tom Cruise and Hayley Atwell who, in a first phase, kept their dating confidential. Subsequently, the two actors began appearing together in public: one of the most photographed releases was a Wimbledon last July

Tom Cruise in Venice: the set of “Mission Impossible 7”. VIDEO

The media then reported a separation between the two last September, which would be followed by a reconciliation. Hayley Atwell also appeared among the guests at the London première of Top: Gun Maverick last May but it seems that the actress was there exclusively as a supporter of the actor

Tom Cruise, therefore, would be single again. Since his divorce with Holmes, the actor has never formalized any relationship with the women he was seen with.