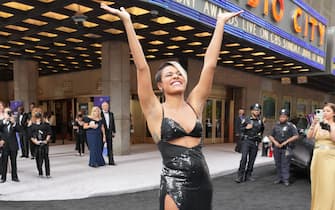 Ariana DeBoseOscar winner for West Side Storywas chosen as the presenter of the Tony Awards 2022. For this unforgettable night the actress and singer, also nominated among the hundred most influential people of the year by Time, wore a custom Boss sequin dress with ultra-thin Or & Elle diamond jewels. Her styling is curated by the duo Zadrian + Sarah

WATCH THE VIDEO: Who is Stefano Massini, winner of the Tony Award 2022

Stefano Massini won the 2022 Tony Award for the best play

Curtain effect for Vanessa Hudgenssplendid in Schiaparelli Couture, from Spring Summer 2022. Also noteworthy are the jewels with a whimsical design highlighted by a ponytail with braid

Happy birthday Vanessa Hudgens: the photos of the actress

Camille A. Brownne showed off an interesting mix of colors: a Carolina Herrera satin tail dress that is particularly suitable for photographers

amfAR Gala Cannes 2022, all the looks of the stars

Darren Criss And Julianne Hough they were masters of the stage for the first hour of the Tony Awards 2022 in which they also performed as a couple, proving their great talent. For the award-winning actor, entry into Givenchy with a shirt with a zip collar; for the Broadway star, a Pamela Roland dress with a decorative neckline

Oscar 2022, the most beautiful looks on the red carpet, from Zendaya to Kristen Stewart. PHOTO

The acclaimed musical star Patti LuPone, winner of her third Tony Award, is among the most elegant of the evening. For her, an evening dress by Christian Siriano with matching long gloves

Utkarsh Ambudkasinger and actor recently also appeared in Tick, Tick … Boom! by Lin-Manuel Miranda amazed everyone with a precious look of the Bode brand, completely decorated with mother-of-pearl buttons

The actors Sam Rockwell And Leslie Bibb they pose together for the photographers at the entrance. For her, a suit with an all-over sequin jacket and bright contrasting edges by Pamela Roland

The star of the stage Judith Light certainly deserves a mention with her long dress Tom Browne with an austere and chic design enlivened by Verdura and Briony Raymond jewels, among the most popular in New York

Among the protagonists of the evening, Zach Braff she opted for a delicate burgundy Paul Smith

(From the left) Shoshana Bean and the comedian Sarah Silverman they joke at the photocall. The musician wears a spectacular couture creation by Christian Siriano

Another splendid Christian Siriano dress for the actress Kara Young. Her flaming orange dress is one of the prettiest of the New York night