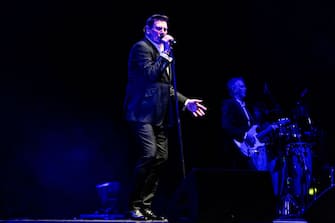 The 40th Anniversary Tour by Tony Hadley stopped at the Arcimboldi Theater on the evening of 23 November, treating the public to a show in which old hits and novelties found their place

On this occasion, the singer retraced his long career, largely lived with the Spandau Ballet

However, Hadley has now definitively left the group and continues to produce music as a soloist

Tony Hadley in Taranto with the Magna Grecia orchestra

The Milanese concert was not the only one in Italy, a country he has always loved very much

Hadley even walked the Sanremo stage, both as a guest with Spandau Ballet and as Arisa’s accompanist on the 2019 duet night

When Spandau came on tour in Italy with the new frontman

Accompanying him on the Milan date was his support group, the Fabolous TH Band

Among his most famous songs, still performed in concerts, are the flagships of Spandau such as True And Gold

In his career Hadley has changed many genres

This versatility was also aided by an extraordinary voice, which many have compared to that of giants like Frank Sinatra and David Bowie

Today, many remember the alleged rivalry between Duran Duran and Spandau

A solid friendship actually existed between the two groups, cemented during the golden age experienced in the 1980s

Tony Hadley often remembers those times but never does it with too much nostalgia. He has no regrets and still dreams of reaching new heights, not only in music. TO Rolling Stone for example, he confessed that he wouldn’t mind becoming an actor in a Hollywood blockbuster