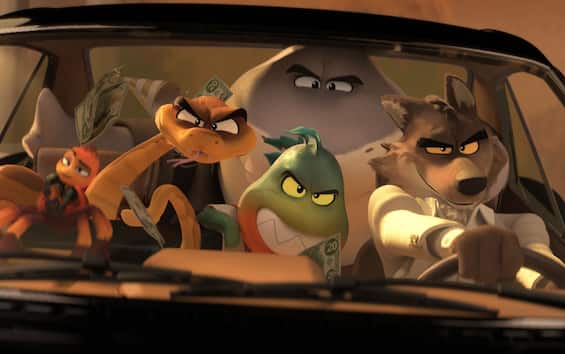 Based on Aaron Blabey’s children’s book series, Too Bad is one of the latest and most amazing DreamWorks Animation productions about the frantic adventures and misadventures of a gang of animal robbers. Known to all as the “Too Bad”, however, they will have to prove that they can change.
With the screenplay by Etan Cohen, based on the highly successful series of books by Aaron Blabey, and directed by Pierre Perifel, the film stars comedians Andrea Perroni (Wolf), Edoardo Ferrario (Snake), Valerio Lundini (Piranha), Francesco De Carlo (Shark), Margherita Vicario (Webs) and Saverio Raimondo (Professor Jam).

The Too Bad are a gang of criminals who constantly set the city on fire with robberies and thefts. These anthropomorphic anti-heroes are Snake, an evil snake skilled in burglary, Piranha, a mad and aggressive piranha, Webs, a hacker tarantula, Shark, a shark specialized in disguises, and Wolf, the charming wolf leader of the gang. Together they make no mistakes and are the police’s most wanted group of super-villains in the world. One day, however, they decide to go further, trying to steal the Golden Dolphin, a very difficult heist that marked the end of the careers of the greatest thieves in history. Even the Too Bad, in fact, will be framed and captured but, instead of going to prison, they will follow a path of recovery with Professor Marmellata, the good-natured philanthropist guinea pig and “Good Samaritan” par excellence, who promises to transform the gang into “Too good”. This kindness re-education program blocks the gang’s plans and creates internal disagreements, but it could be an opportunity to really change.