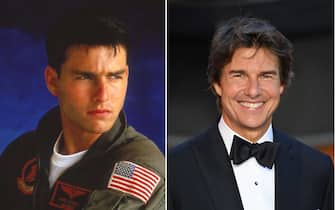 In 1986 Top Gun, the film dedicated to the American heroes of the air, starring Tom Cruise, Kelly McGillis, Val Kilmer and Meg Ryan, was released in theaters. The film introduced F-14 pilots, Pete “Maverick” Mitchell, Nick “Goose” Bradshaw, Tom “Iceman” Kazansky to audiences around the world. The love story between Maverick and Charlie Blackwood, played by Kelly McGillis, together with the companies of the protagonists decreed the success at the box office of the film directed by Tony Scott, which grosses over 350 million dollars and gets an Oscar.

Kelly McGillis played the role of Charlotte “Charlie” Blackwood, a Top Gun instructor and Maverick’s love interest. The character is based on a real person, Christine Fox, who worked at the Marine Corps’ Miramar Air Station

Val Kilmer was Lieutenant Tom “Iceman” Kazansky, one of Top Gun students and Maverick’s rival turned wingman. Kilmer initially didn’t want to be in the film

Did Tom Cruise get a makeover? Photos of the actor yesterday and today

Top Gun, 10 curiosities about the film with Tom Cruise

Nicole Kidman and Tom Cruise, twenty years after the divorce: their story

Actress Jennifer Connelly is one of the new entries in the Top Gun sequel. Portrayed a single mom on whom Maverick’s sentimental attentions fall