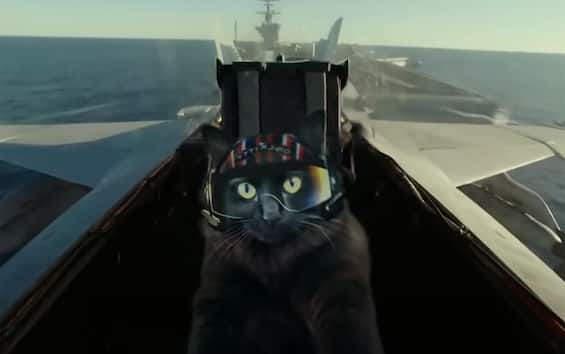 Top Gun: Maverick is the franchise’s latest blockbuster hit Top Guns. He marked the return of Tom Cruise in the shoes, indeed, in the leather bomber jacket of the hero aviator. The success was enormous so much that they were born countless parodies of the film and its characters. Among those that are enjoying the most success there is Top Gun with a Cat. Anyone who hasn’t opened social media in the last few hours or taken a tour of the web probably doesn’t know what it is. The others, on the other hand, probably chose it as a convivial conversation with colleagues during the lunch break or, the luckier ones, during work in the office. But for those who think that all this is a project that could soon arrive in theaters or on streaming platforms: it won’t happen.

Things Top Gun with a Cat

The short clip that is racking up millions of shares a day and which has gone viral all over the world is a trailer, cleverly and precisely edited, which was published on the profile called OwlKitty. The characteristic of this very popular YouTube profile is that it exclusively (or almost) creates parody videos. Top Gun with a Cat is no exception. In the clip, in fact, most of the video sequences in which Tom Cruise is originally present have been replaced by a black cat who, not so much with a helmet on his head, engages in the extraordinary feats that the human version of the character usually performs. However, the editors did more because they didn’t limit themselves to reviewing the latest blockbuster but also worked on a parody of the progenitor, the film from the Eighties still starring Tom Cruise, who in the OwlKitty trailer was replaced by cat.

The edited scenes in the parody trailer

Those who have seen both films cannot fail to recognize the original images from which the parody trailer was taken. In fact, among the many scenes that have been artistically revised there are, for example, the iconic moment of training aboard the aircraft carrier, and still the test flights aboard supersonic planes and motorbike races. The creators wanted to take some of the most iconic scenes from the films to make the fake trailer immediately recognizable and associable with reality. The cat used for filming is a real feline, as the images of backstage of the trailer that were shared on the same channel just a few days ago.