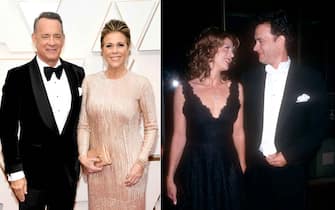 Tom Hanks and Rita Wilson married in 1998. Two children were born from their relationship: Chester (1990) and Truman Theodore (1995)

Christopher Walken and his wife Georgianne have been married since 1969

Couples that broke out in 2022: all the VIPs who said goodbye

The one between Meryl Streep and her husband Don Gummer was not love at first sight, but rather the light at the end of the tunnel where the actress had sunk after the tragic death of her first boyfriend. The two married in 1988

Francesco Totti and Ilary Blasi broke up. The photo story

The model Patti Hansen met her future husband Keith Richards, guitarist of the Rolling Stones, on his birthday, in 1979. In the same year the two get engaged, and then get married on Keith’s fortieth birthday, December 18 1983

I see double! 20 stars of today who look like those of the past

Sting is one of the few celebrities who can boast a very long and serene marriage: since 1992 he has been married to Trudie Styler

No Makeup: from Chiara Ferragni to Elodie, this is how 35 natural stars are. PHOTO

In 1981 Michelle Pfeiffer married actor and director Peter Horton, from whom she divorced seven years later. Pfeiffer adopts a daughter, Claudia Rose, and in 1993 she married producer and screenwriter David E. Kelley; in 1994 the couple had a son, John Henry

The best films of Michelle Pfeiffer

In 1988 Michael J. Fox and Tracy Pollan got married. Together they had four children: Sam Michael, born in 1989, the twins Aquinnah Kathleen and Schuyler Frances in 1995 and Esmé Annabelle in 2001

Bono has been happily married since 1982 to Alison Stewart, an Irish activist he met in 1975 while studying at Mount Temple School in Dublin.

All That You Can’t Leave Behind by U2 turns 20: it is reissued

Jeff Bridges on social media: “I was diagnosed with lymphoma”

Jamie Lee Curtis met her husband Christopher Guest after seeing him in an issue of Rolling Stone magazine with Cyndi Lauper on the cover. In the newspaper in question, Guest appeared in a promotional photo for the film This is Spinal Tap made up and dressed as a rock star. The actress was so impressed with this photo that she gave her phone number to Guest’s agent, asking to have her call back. The two married in 1984 and adopted two children, Annie and Thomas

In the 1990s, Elton John began a relationship with Canadian director David Furnish; the two were first civilly united in 2005 and then married in 2014. They had two children, both born to the same surrogate mother: Zachary, born in California on Christmas Day 2010, and Elijah, born on January 11, 2013. The godmother of both was Lady Gaga

Did you know these actors have come out? THE PHOTOS

Happy birthday Jay-Z: photos of the rapper yesterday and today

Sarah Jessica Parker and Matthew Broderick met in 1991, married in 1997 and have three children, James Wilkie and twin girls Marion and Tabitha, born to a surrogate mother

Sarah Jessica Parker, here’s how the actress has changed

Someone Save Christmas 2, the trailer for the film with Kurt Russell

On January 7, 2006, Pink married professional motocross rider Carey Hart in a ceremony on the beaches of Costa Rica; the two separated on February 20, 2008, but got back together in April of the same year and on June 2, 2011 their first daughter, Willow Sage Hart, was born at Cedars-Sinai Medical Center in Los Angeles, California. Their second child, Jameson Moon, was born on December 26, 2016

Hugh Jackman and Deborra-Lee Furness have been married for exactly 20 years and parents of two children: Oscar Maximilian Jackman (adopted in 2000) and Ava Eliot Jackman (in 2005)

Wolverine, how Hugh Jackman has changed from the first to the last film

Matt Damon and Luciana Barroso fell in love in 2003. She, a bartender from Miami, already had a daughter. The two married in 2005 and are parents of three girls

Matt Damon, yesterday and today: how the actor of The Great Wall has changed

Catherine Zeta-Jones and Micheal Douglas, after many years of marriage and two children (Dylan, 16, and Carys, 14) could not be more united. They went through (and overcame) a crisis in 2013

20 actors side by side with their most famous characters

Amy Adams and Darren Le Gallo met in 2001, in acting school. Their engagement had already been announced in 2008, but, due to the actress’s commitments, the wedding had always been postponed: until 2015. They have a daughter

Bryan Cranston and Robin Dearden have been husband and wife since 1989. They first met on the set of the Supercopter series. They have a daughter: Taylor

From mother to daughter, when acting is a family matter

Ellen DeGeneres and Portia De Rossi met in 2000, when they were both engaged in other relationships. Since 2004, they have been a steady couple

Did you know these actresses have come out?

Jon Bon Jovi has been married since April 29, 1989 to Dorothea Hurley, a former high school friend.

Julia Roberts met cameraman Danny Moder on the set of The Mexican in 2000. He put the ring on her finger in 2002

The marriage between Kevin Bacon and actress Kyra Sedgwick has lasted since 1988. The couple had two children, Travis and Sosie Ruth

Greetings Kevin Bacon, how the Footloose actor has changed

Star soap and water. Here’s what 25 natural celebrities are like

Germany, 185 actors and actresses come out in mass

Since their marriage in 1997, they have always been “the perfect match”. However, this iconic couple also ran into problems. Jada has indeed confessed that when she and Will secretly separated, she dated a younger man. Despite all their bond was stronger than the crisis and Will welcomed her with open arms and decided to give their relationship a second chance.

Academy: Will Smith will not be able to attend the Oscars for 10 years